Home Men 25+ Sun Tattoo Designs that will make you shine

Sun tattoo is one of the popular mainstream tattoos that’s worn by both men and women. The sun is quite important for our existence as human beings and identifying with the sun in itself carries a deep meaning and symbolism. Different cultures identify differently with the sun with some seeing the sun as a god and is always there to protect them others attach different spiritual and religious meaning to the sun as having good and bad effects on the earth.

Sun, moon and stars are by far some of the most fascinating subjects for both science and tattoo designs. A sun tattoo can be very significant to many people, in fact, it is one of the most popular design elements requested. The value of this design, in terms of symbolism, represents a very deep value for life itself. The symbolic and mystically design is amongst a favorite for both men and women. The individual manner in which the sun is drawn in body art has many interpretations. Providing a wealth of options as far as color and size, it would be pretty hard to find two people in the world with the same exact sun tattoo.  For example, a sun tattoo can be simple, realistic, futuristic or tribal. 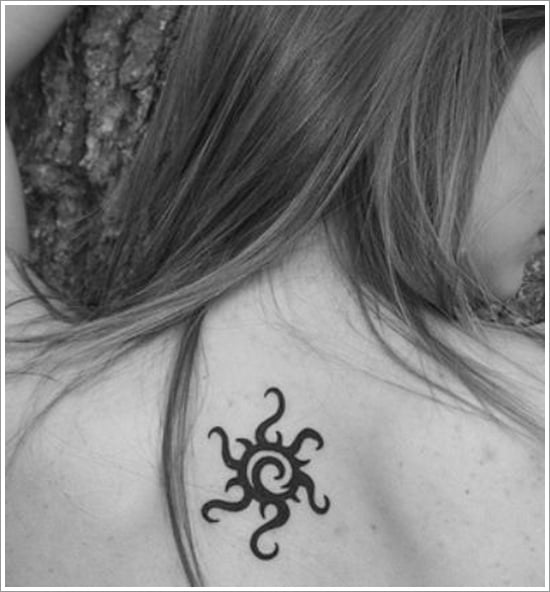 The sun is perceived by some as a symbol of glory and life. Wearing the sun tattoo is identifying with the glory and the life that’s derived from the sun. There are different types of sun tattoo with some designed altogether with sun moon and stars. The sun tattoo below on the back of the woman looks beautiful and well crafted. The place the tattoo is worn is very visible and attractive. 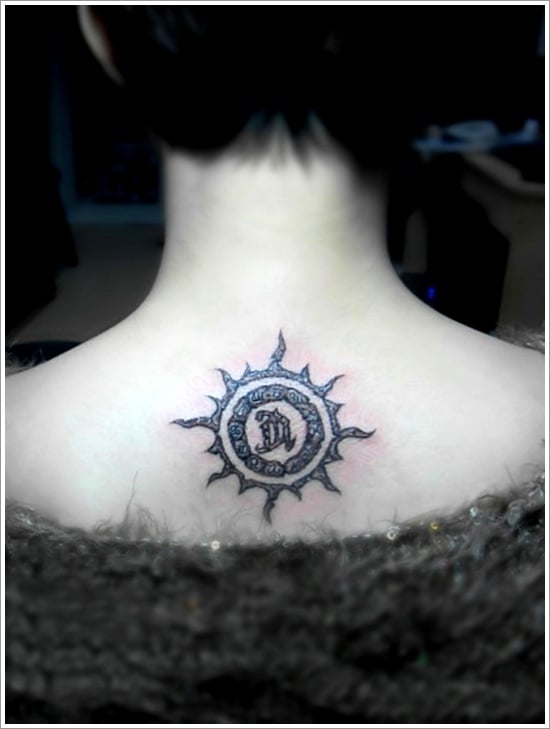 The sun is at the centre of our galaxy and is very vital for the growth of all the living things on earth as it provides the required heat and light. Many ancient cultures worshiped the sun as it was perceived as the life-giving energy. The sun tattoo below is quite dynamic given the additional features that enhances the actual outlook of the sun tattoo and is suitable for women. 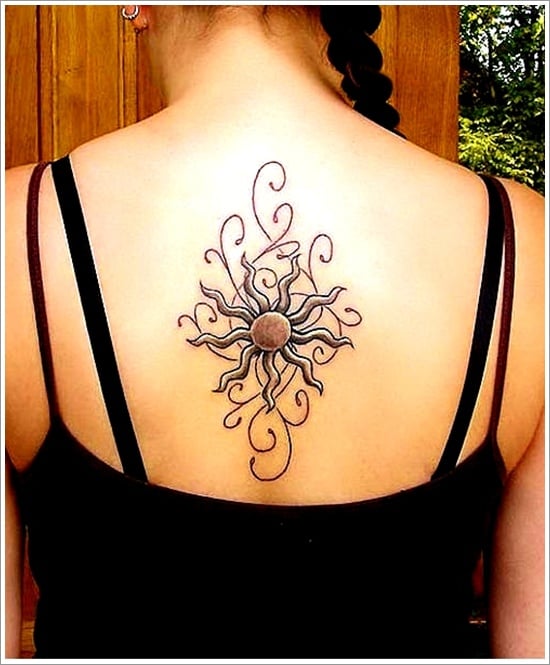 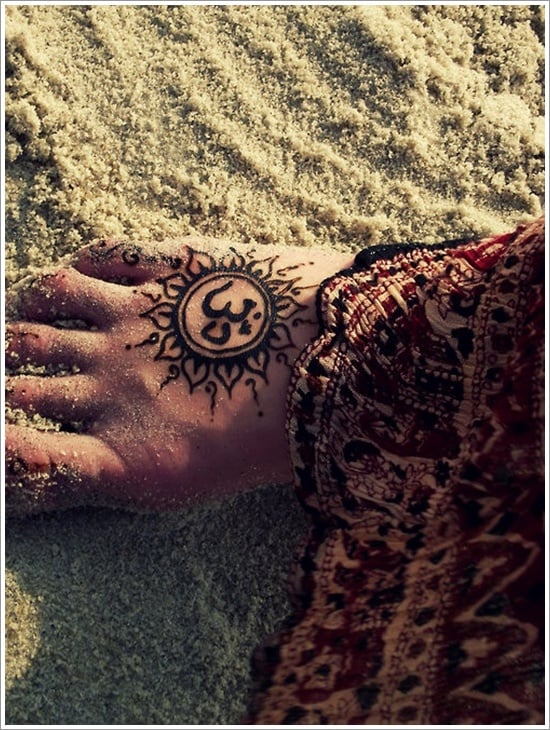 The sun tattoo can be creative, important and highly significant, depending on the other elements in the design. When we take a look down the corridors of history, you will find that there were a great many cultures that worshiped the sun. With the sun being the center of creation and life, it was recognized and worshiped as a symbol of life. It is indeed the sun that provides us with light and energy to come into existence and once we come into existence, to grow and flourish, making it a design elements that can have many hidden meanings as well. 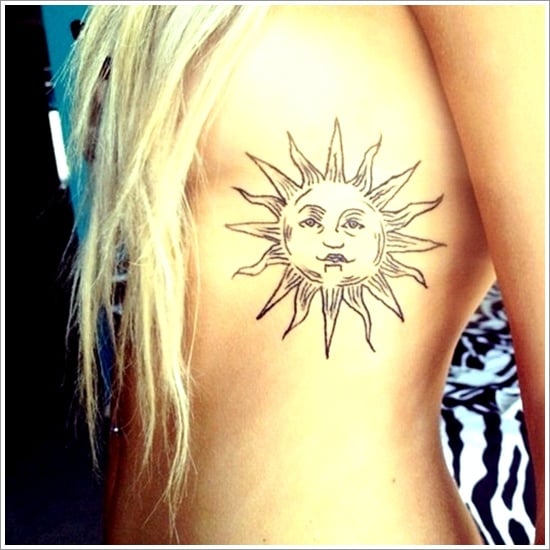 There are different designs for the sun tattoo and some of the styles of the sun tattoo include the tribal styles, black sun and celtic styles. The sun tattoo design below is quite dynamic reflecting a great work of art with the style and the features creating such a cool and attractive design. 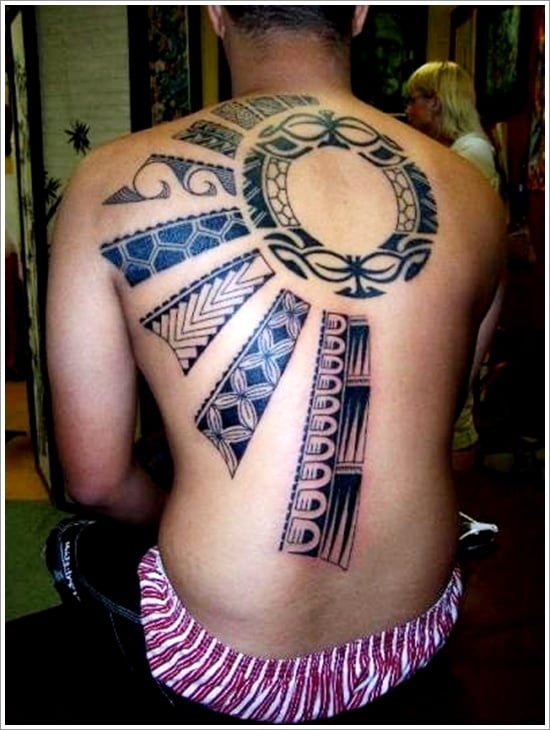 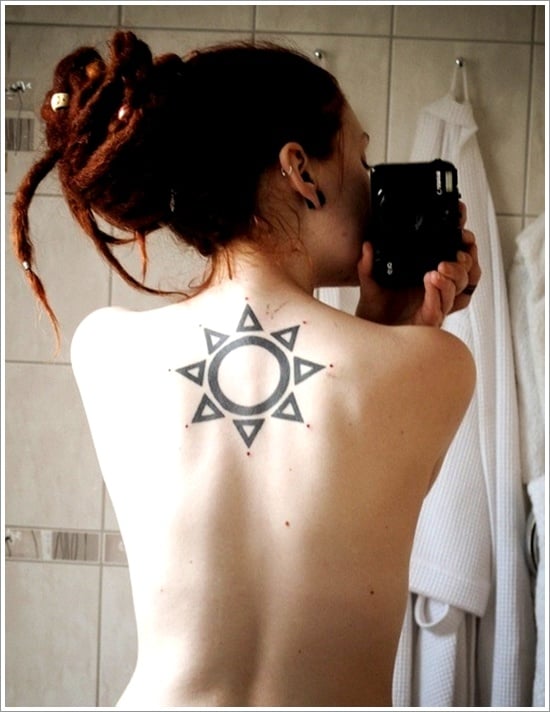 Many older cultures linked the sun with fertility, energy and a healing force that kept life going. Among the Native Americans it was believed that the sun is the guardian that guards and protects the day and daylight. The way the sun has been represented visually also has been quite varied and very interesting. Among the designs are ones which show the sun as a simple circle with a dot in the middle. This is a motif that you will find quite commonly in Astronomy and astrology. With Egyptians in the ancient times believed that Ra, the sun god, was worthy of worship. Many designs show the sun as a solar wheel with a cross. The cross has equal sides making it look very different from typical designs. The sun designs are also very popular in the Middle East. 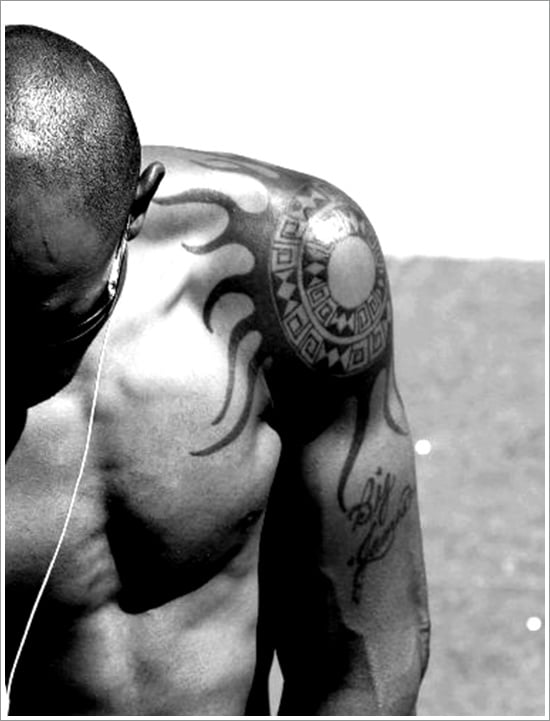 Incorporation of flowers in the sun tattoo makes them look quite feminine and beautiful. The sun tattoo below looks stunning and well designed. Most sun tattoo are designed using black ink which blends quite well with the complexion of the wearer below. The tattoo has been worn in the shoulders making it visible as it also enhances the wearers looks. 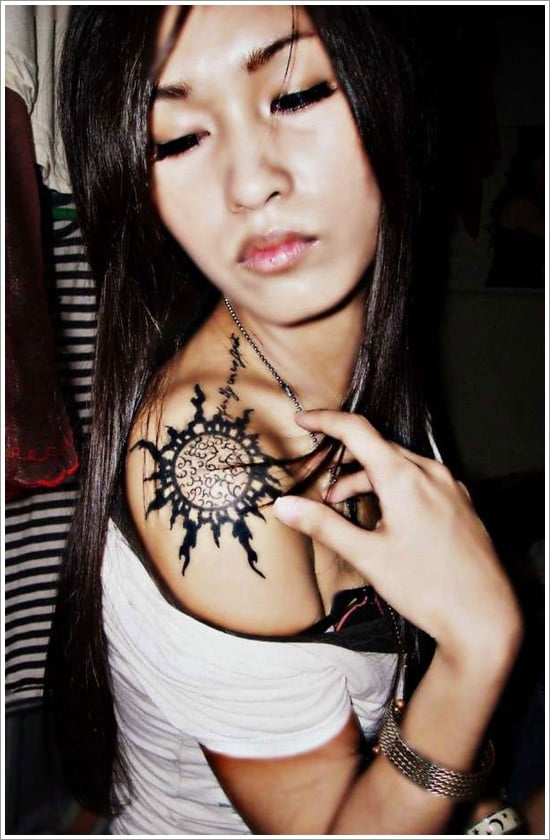 The popularity of the sun tattoo designed have greatly soared lately given the association of international celebrities with the tattoo. The size of the tattoo is a major determinant when deciding on where to put the tattoo. A large tattoo looks great when worn on the part of the body that fully exposes it without hiding some designs just like the yellow sun tattoo below. The designer has done a great work with the styles and features used well harmonized giving the sun tattoo such an elegant look. 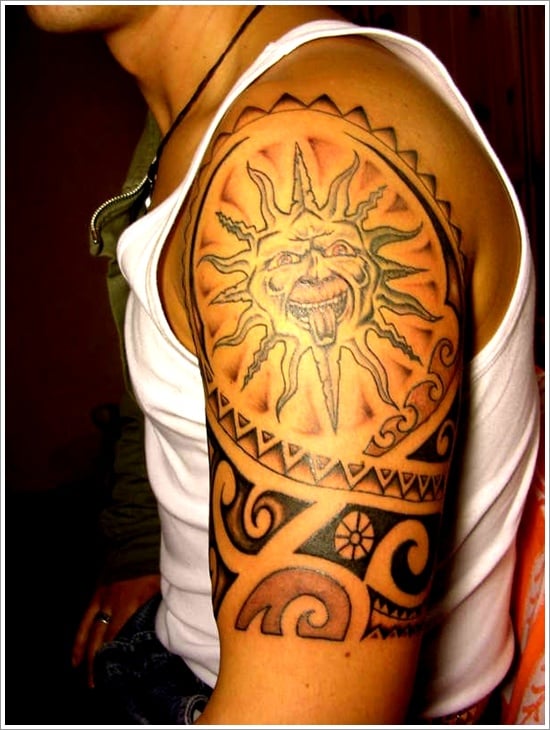 Among Christians, the sun depicts energy, power, birth, rebirth and all aspects of life. It was also believed that the sun represented the lord Jesus Christ himself along with his many life giving and saving qualities. It is also believed that the solar and lunar bodies are linked, which in any case happens to be the truth. In tattooing the sun is often represented in floral forms. Sometimes it takes on the form of the mystical dragon or the indestructible phoenix. Among the floral representations the popular ones are holy and pure lotus, the beautiful rose and the radiant sunflower. These definitely add to the look of the tattoo. 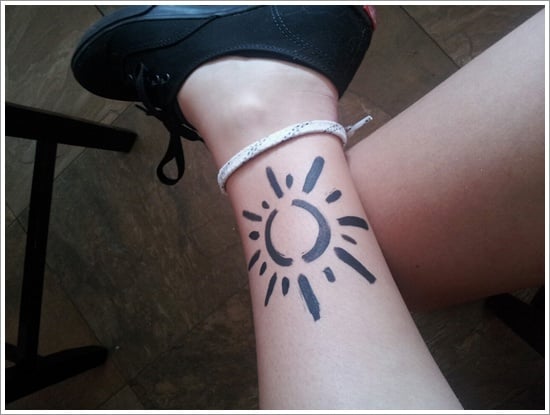 Though sun tattoos are worn by both men and women there are some styles that specifically appeals to men while others are quite feminine. The tattoo design below is an ideal expression of versatility looking at the combination of the sun tattoo with the features. The place its worn makes it create some expression of the wearers character that’s quite feminine. 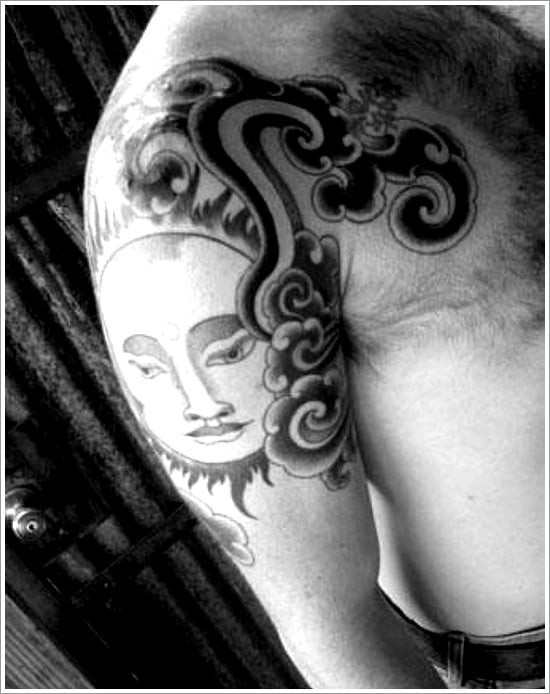 The tribal sun tattoo design below looks spectacular on the wearer. The colour of the tattoo and the complexion of the wearer blends quite well. The tattoo is simple and enhances the look of the belly with the buttons looking great. The sun is regarded as a symbol of truth and endurance and the wearer can draw inspiration by glancing at the tattoo and relating it with the meaning its given. 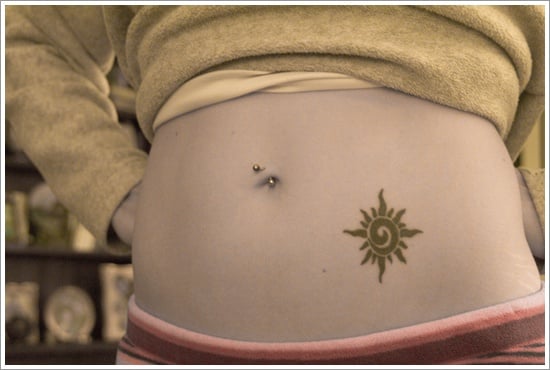 Many culture like the Aztecs, the Romans, the Egyptians and Romans actually worshiped the sun. Indians also had a place of reverence and importance for the divine Sun god. In fact among the Zia Indians the sun symbol would be painted on vases used in religious ceremonies. 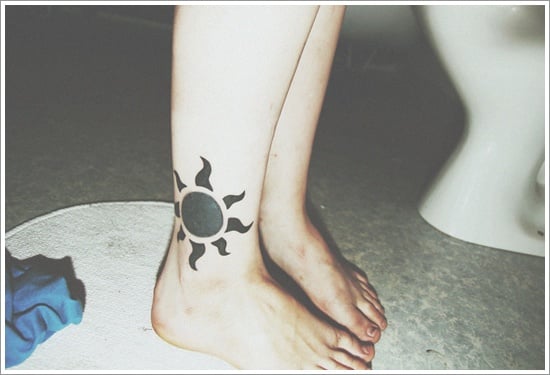 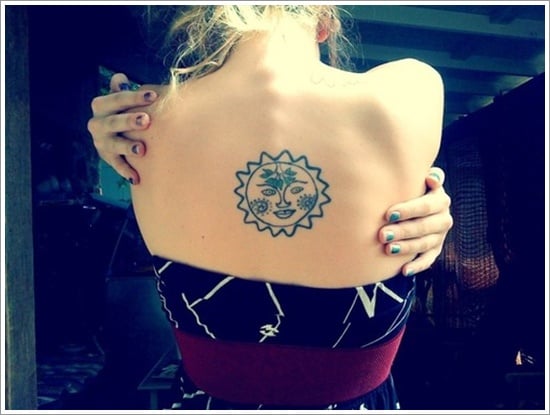 Sun tattoos are often perceived as a symbol of a guardian and wearing the sun tattoo design at the feet like the design below can be taken to symbolize divine leadership or direction. It can also mean having a guardian that’s leading you all through the way. 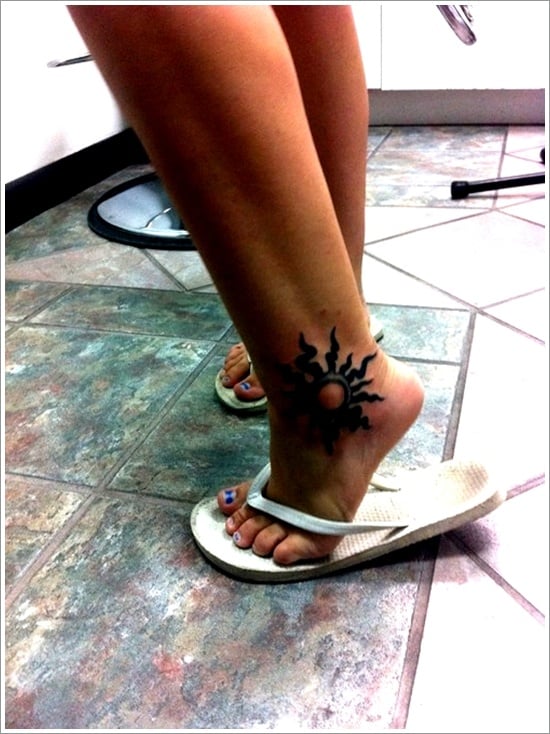 With the sun depicting things like light and truth there is no wonder it is a much sought after tattoo design. There are many styles in which you can get a sun tattoo including the tribal, Celtic and other styles. The sun and moon have also been considered and Yin and Yang forces it also represents the logical and emotional sides of your nature. 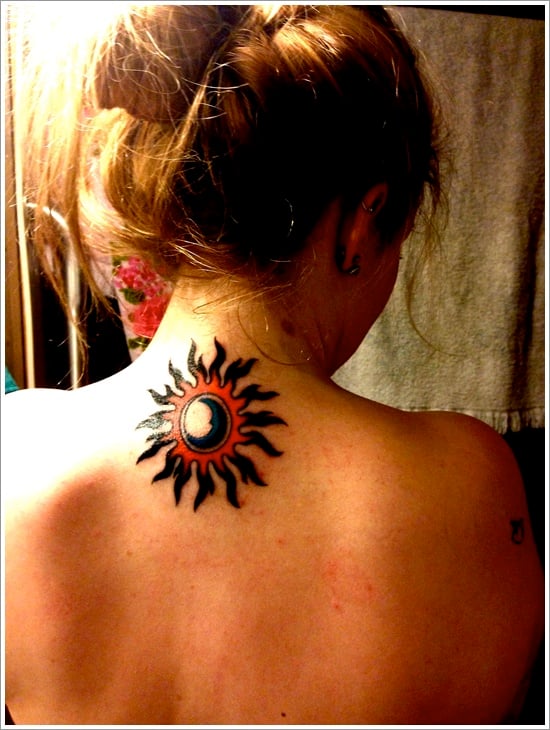 There are different meanings attributed to the sun tattoo and it’s good to choose the sun tattoo design based on not only the way it looks but also what it means to you. You can choose a good design but if it’s not worn in the right place where it can be clearly visible it can somehow compromise on the beauty of the tattoo. The sun tattoo design below looks beautiful especially on the back where its worn. 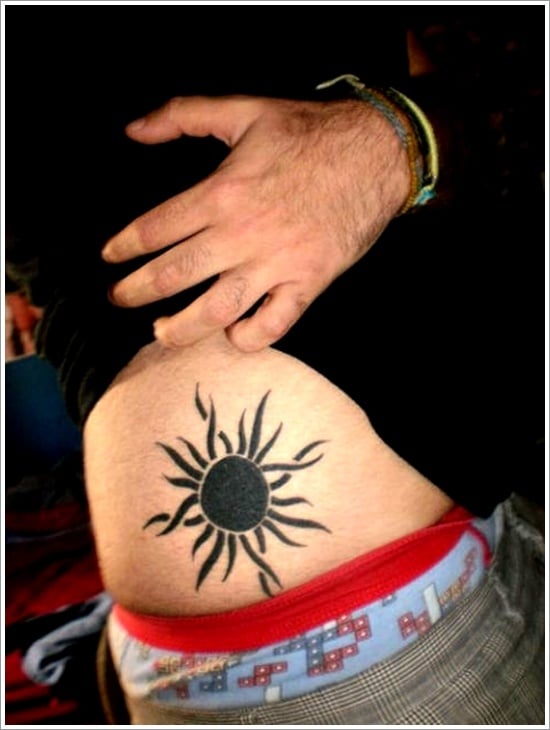 The sun tattoo design below is quite fascinating and has great masculine features making it ideal for men. The upper arm where the tattoo is worn is large enough making the entire design impact on the wearers appearance. 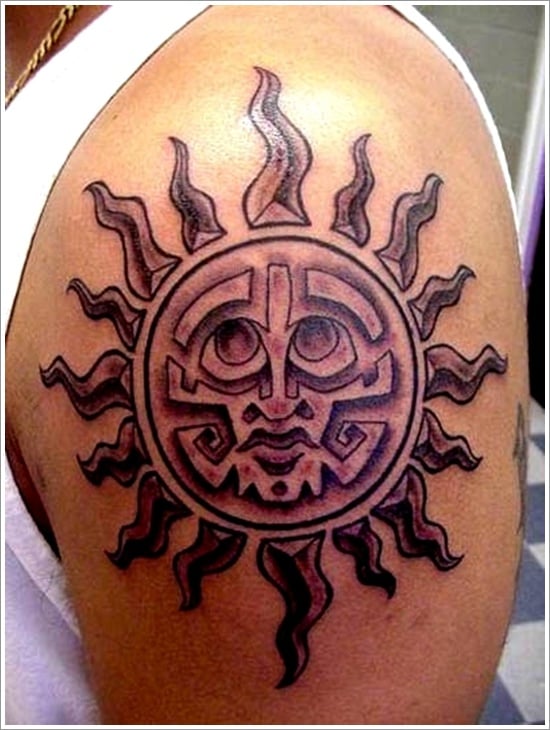 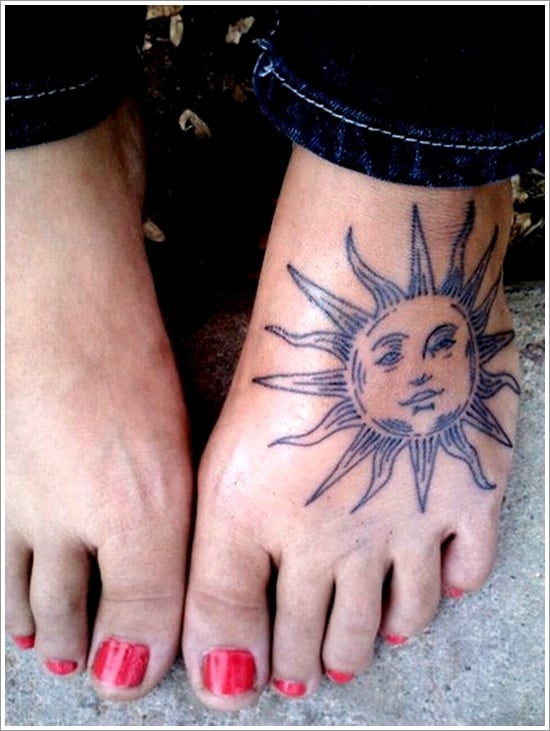 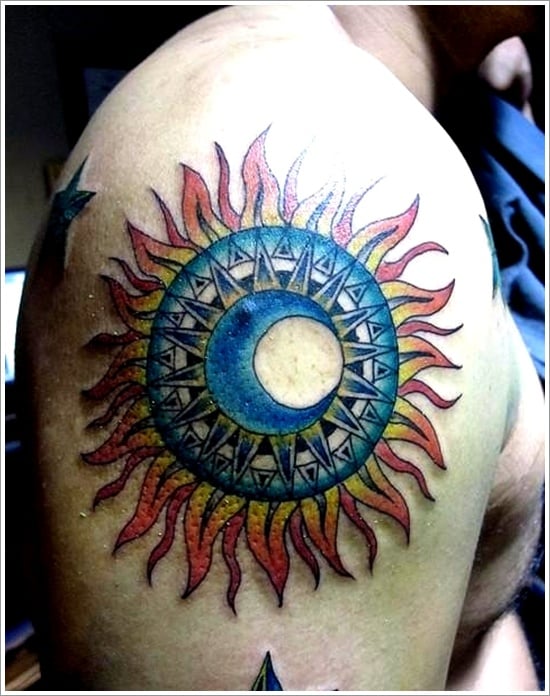 The combination of the sun and the moon tattoo looks quite spectacular just like in the sun design below. Sun and moon tattoo design is often perceived as the man and woman with each seen to support one another in a way.The place the sun tattoo is worn looks quite stunning and adds to the ladies general outlook. 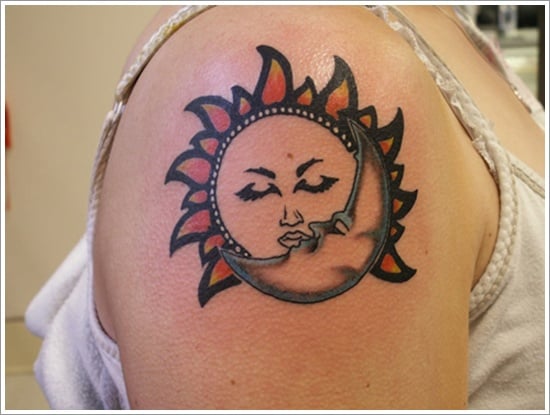 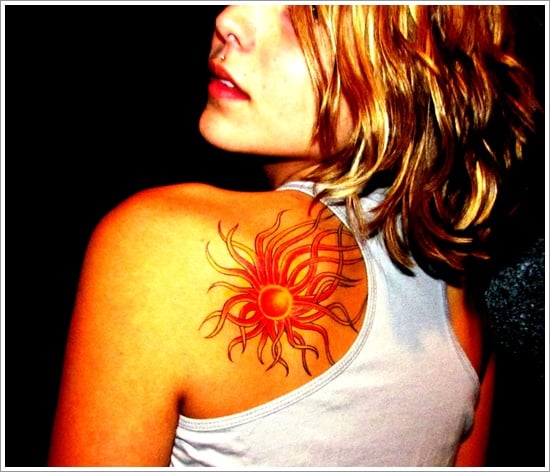 The sun symbol was a highly regarded symbol in the ancient cultures with many meanings and myths associated with the symbol. Its therefore appropriate to wear the sun tattoo designs in a way that depicts the sacredness of the tattoo if the meanings are to be communicated correctly. The sun tattoo design below depicts a real sun with the sun rays showing quite clearly. 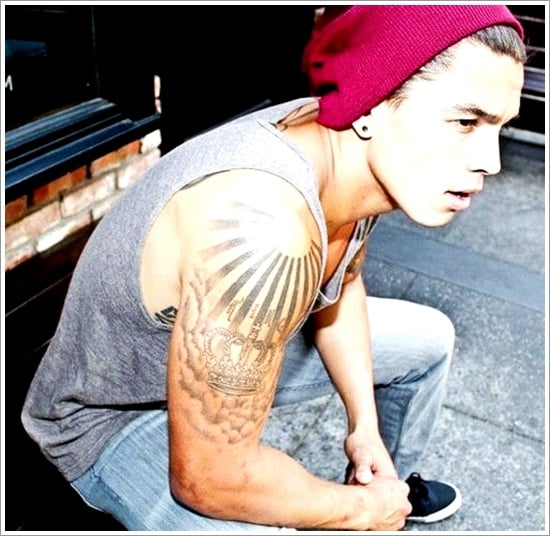 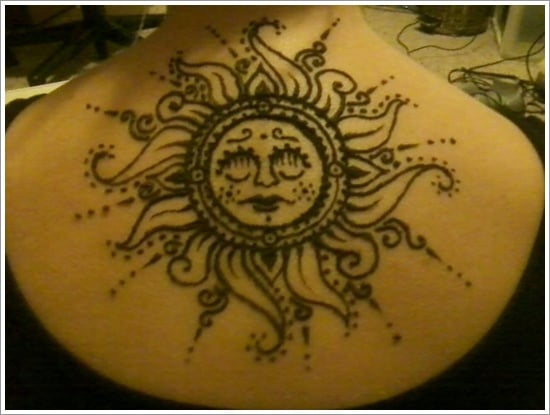 The sun tattoo design is a timeless design as its still valued by many just as it was in the ancient times. The meaning of the sun tattoos makes the design to appeal to many people as quite a number would love to identify with a symbol of strength, courage, guidance, god and more.The sun tattoo design below blends well with the wearers complexion and looks quite feminine making it ideal for girls. 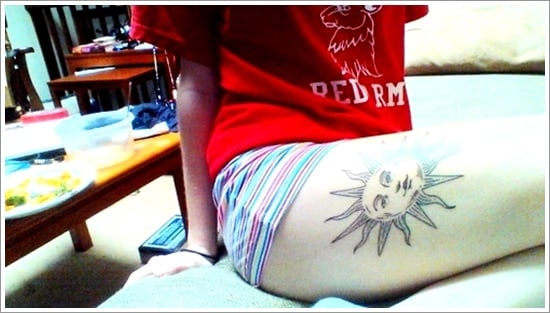