Some pertinent details about Straight Edge Razors: These have been a part of life since about 5 centuries back and now these are catching attention due to their attractive and artistic form. Many have started collecting them for preserving as an item of art for the future. In fact it was popularly utilized till later than the mid of the 20th century. With the spread of HIV/AIDS alarm and awareness, men did not trust using this kind of razor due to hygienic reason. Then came the razors and blade which were easier to use and considered safer too.  This new tool phased out the older one. Now many people use this tattoo as a memorial to the earlier era  shaving tool. Plus it lends itself beautifully to be designed as a tattoo.

Types of Razor tattoo designs: You will be stunned to see the variety of designs and the other elements added to them. There are some awesome handles but also other motifs like webs, flowers, stars among other things. 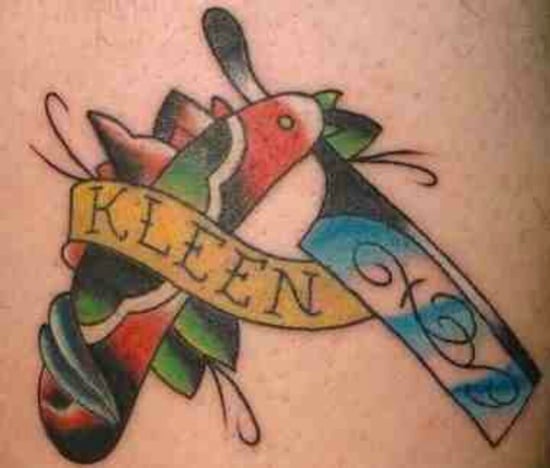 Straight Edge Razor in Blue and Orange : This shows the evolutionary process that the razor went through from being elaborate and ornate to more streamlined and usable. The lovely use of colors and the three dimensional look adds to the charm. The handle seems to indicate a snake skin pattern. Plus you can see the button that shows where to press to open it. 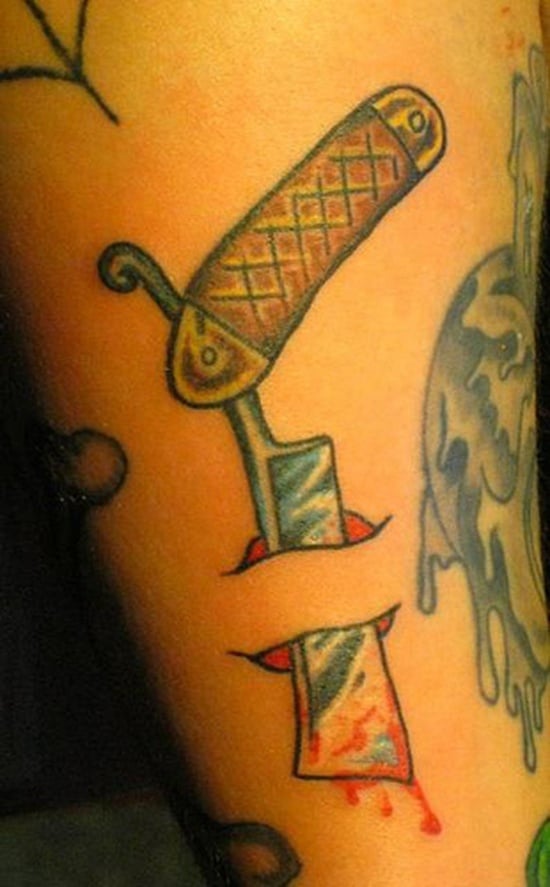 Leaves and flowers with Razor Tattoo: This is done on a lady who uses the straight edge razor but decorated with feminine elements like leaves and flowers. Looks pretty and very picturesque. If you look closely you can see that this flower has been colored in with not only the obvious color of red, but also white. The white ink stands out a little brighter than this person’s skin. The mix of a bright red and white really allow this flower to come alive on the skin. 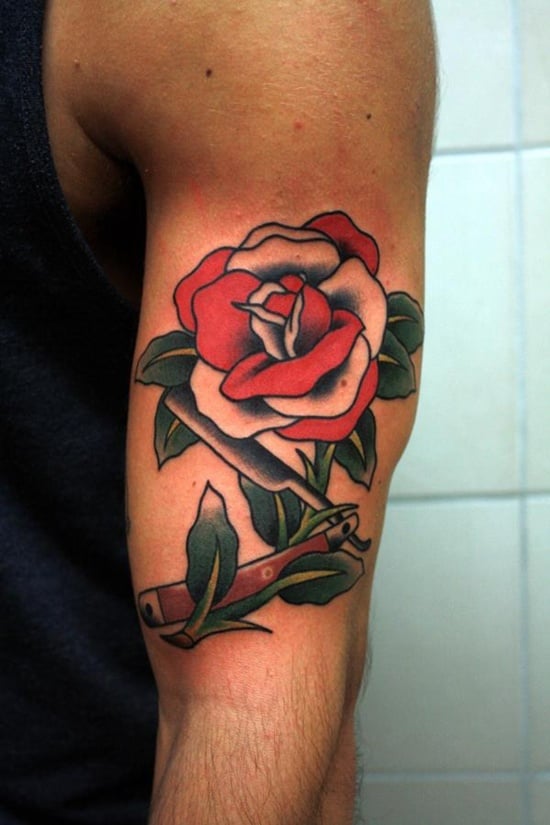 Spider web with Razor Tattoo: Once again some detailed work on the handle along with the lines make it look good. The addition of the spider web on that shows that the blade must has been lying around for some time. The spider web can also symbolize that this person may have spent some time in prison. The handle of this straight edge razor is very well detailed and the skull within it looks incredible. the slight addition of yellow in the handle and blue in blade give the handle a weathered look and the blade a shine. 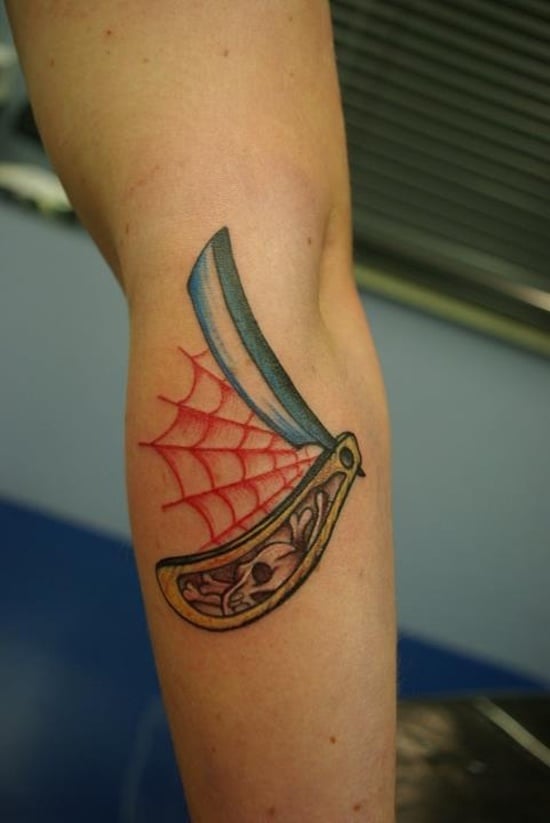 Dripping blood with Razor tattoo: This one shows the dripping of blood on  a razor that has blue and purple colors on it. It looks as if the razor is slicing through something that is not hard. As far as symbolism is concerned, one would believe that it is quite personal. Plus the addition of the German Cross adds to the lovely look of it. 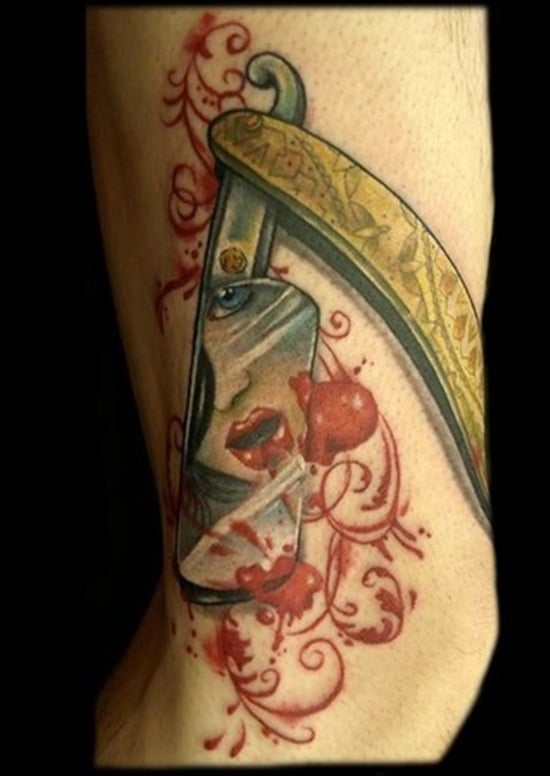 Razor tattoo with Ripped Flesh: Since we are talking about razors whose main goal is to slash the one that makes sense. But it goes without saying that not many people have the stomach for ripped flesh tattoo since it looks kind of painful. The razor is shown as if it is slicing through flesh to reveal the insides. The detailed work on the razor makes it really good 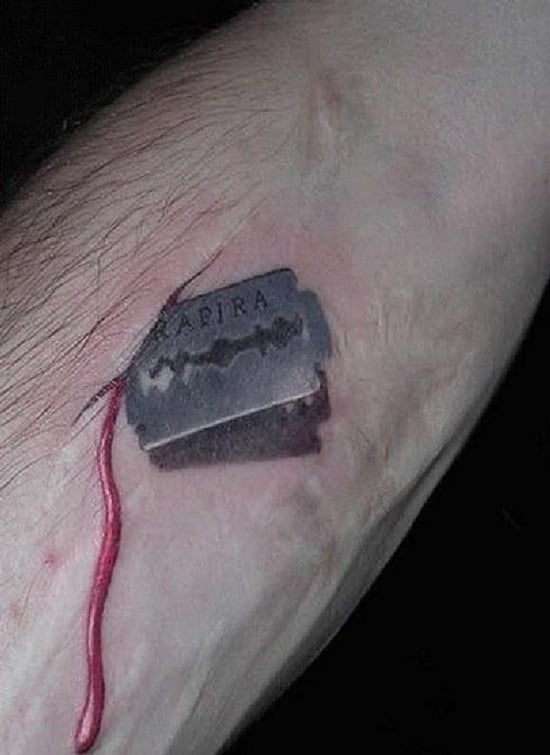 Hip Razor Tattoo: This one looks great due to use of dark ink and the three dimensional effect adds to the whole thing. You can see that much thought has gone into it to make the handle look indented and protrusion of the  design that is on the blade. With some stars in the background this tattoo is really great. The only thing that we can talk about that is lacking in this tattoo design is probably the elements of fantasy as it leans too much towards reality. 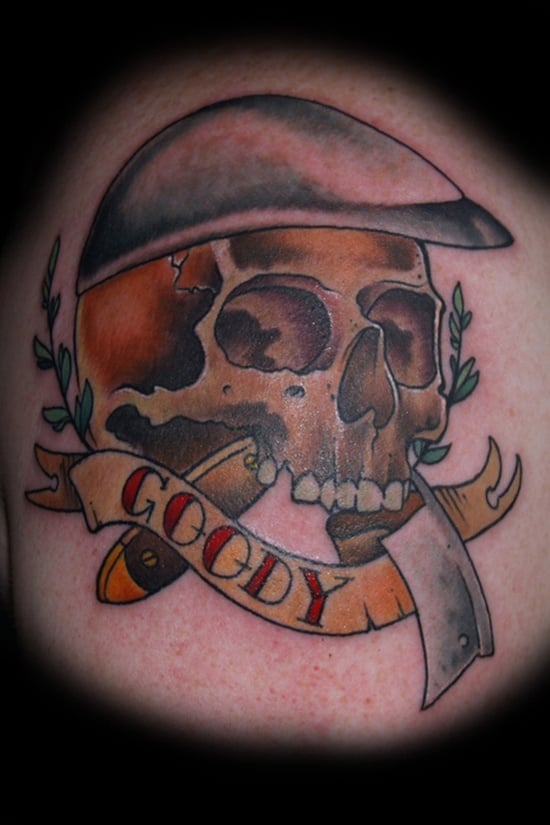 Designs for Razor Tattoo:   Though not appealing to all,  you can see that straight edge razors make for fascinating designs for tattoos. This has been demonstrated by the examples above. With the variations in the elements that you can include in the razor tattoo, the choice for designs really expands. And you know that these are going to be the center of attention and something of a conversation piece, no matter what kind of design you go with. So research for yourself, discuss with friends and family members, think and think some more to come up with your own unique and individual shape, size and design to take on. More examples of Razor Tattoos have been shown below:

8. This cupcake tattoo is sweet and dangerous at the same time. With a banner that reads “sweet” in Spanish, and a razor blade sticking out of the pink icing, be careful where you take a bite because you may soon be tasting your own blood. The colors are really well done in this tattoo and the different shadings of pink give this cupcake texture and depth. I think this tattoo symbolizes that this person is sweet and nice but also has a dangerous side. 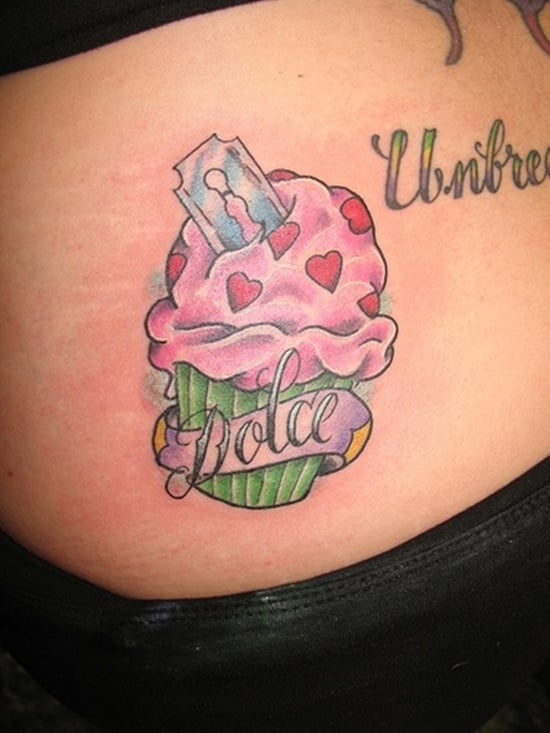 9. This little razor and scissor combo tattoo behind this woman’s ear is a cool piece that can be easily hidden if need be. I would guess that this person is a hair stylist of some sort due to the two symbols that have to do with cutting hair. Its not easy to get that much detail into a small spot like that, but this tattoo artist managed to pull it off really well. 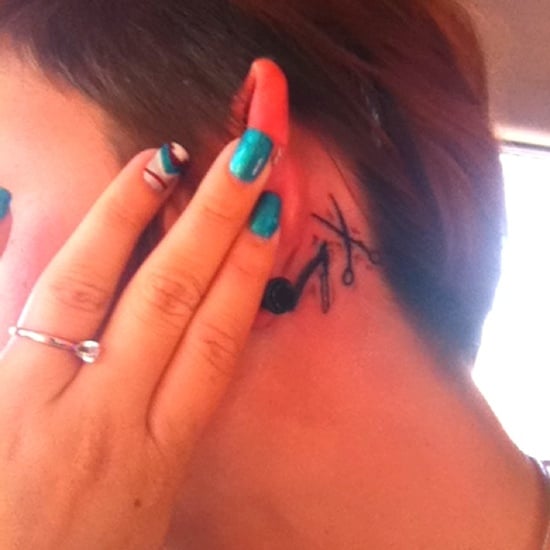 10. This tattoo is a little depressing and a little simple. The razor blade was placed on the wrist with spots of blood on it for a very particular reason. A way to take your own life is to cut your wrists with a razor blade. My hope is that this person never does that and that this is just a symbol to remind this person of where they have been or what they have overcome. The line work on this tattoo is well done and the little addition of color makes this small tattoo stand out really well. 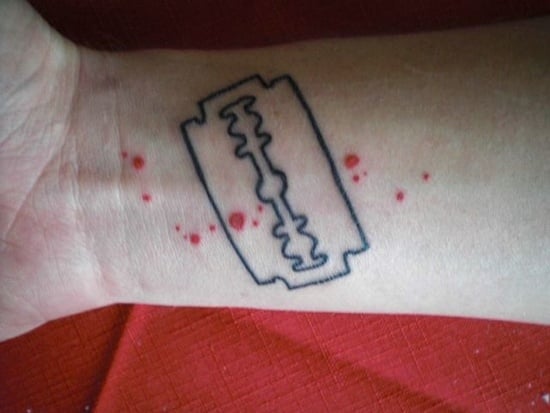 11. What a clever idea to get a straight edge razor blade tattoo on the inside of a finger. As this person stretches out their finger, the blade straightens out, and as they bend their finger, the blade begins to close. The amount of detail in such a small spot is hard to do but its very well done here. Even the small design inside of the handle looks really well done in such a small tattoo. It would take a steady hand to do a tattoo like this. 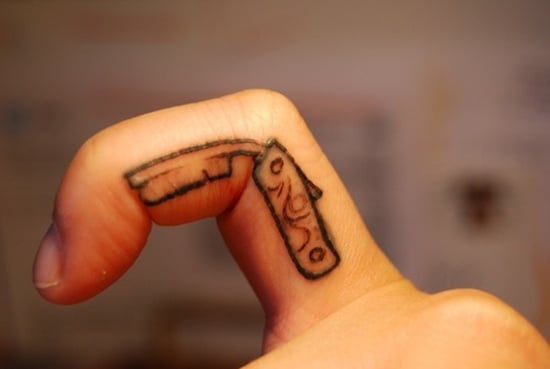 12. I love how much color this girl has used to fill her neck up. The flowers, the razor,, and everything else is radiating off of this woman’s throat so effortlessly. The black and yellow handle of the razor has the perfect amount of shading and coloring. When you begin to look at the blade, you can see that the razor is cutting into her skin and blood is beginning to pour out of this girl’s neck. This american traditional razor tattoo is perfectly placed within this girls modern neck piece. 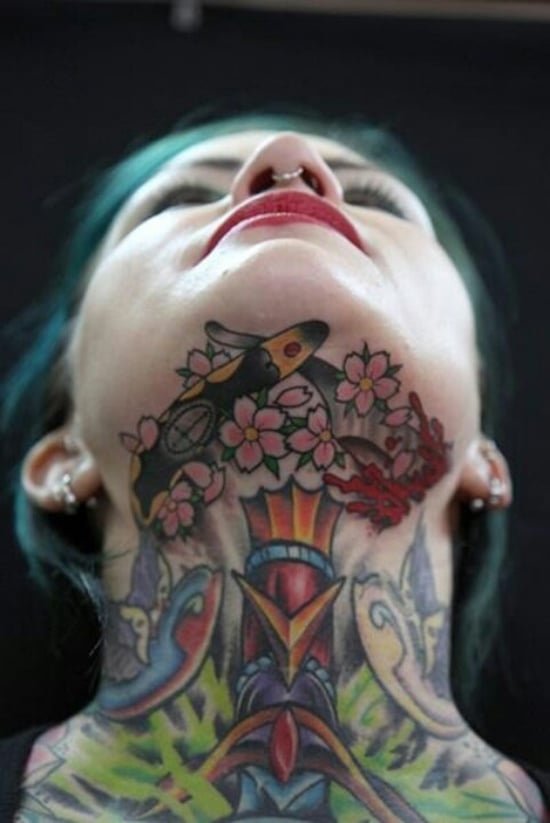 13. This is a clean and simple take on the classic straight edge razor. You can tell that this blade has been well used by the divots in the blade. The shading on the handle is really impressive and really allows you to see the vision of the tattoo artist. This tattoo is perfectly placed as well so that when this person opens and closes their arm, the blade opens and closes as well. clever and unique idea. 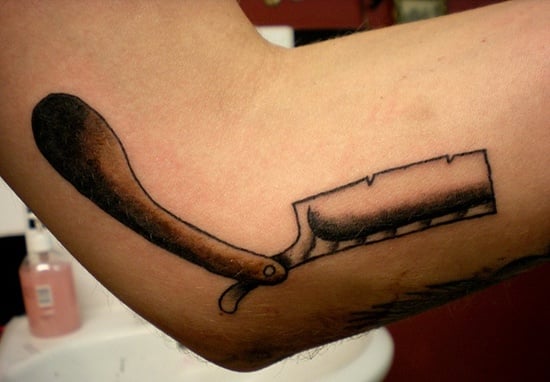 14. Depending on your take, 13 is either a lucky number or a ton of bad luck, lets hope that its lucky for you. 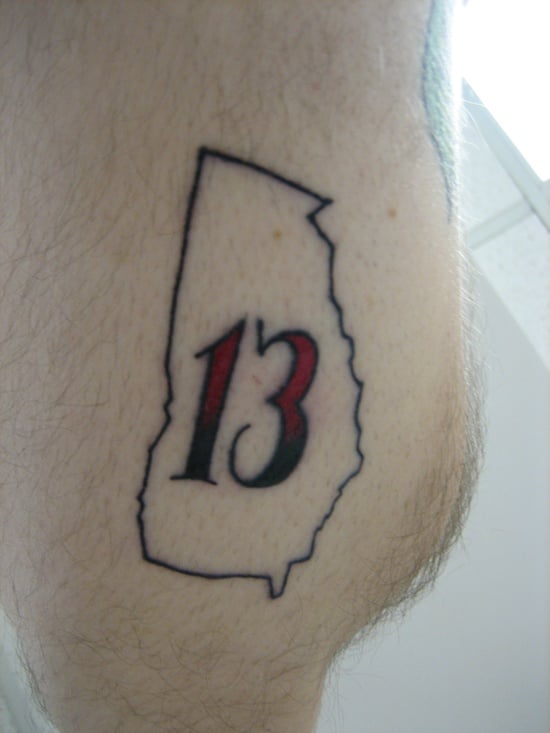 15. This straight edge razor is surrounded by a lot things, and is in  the midst of a storm of color but somehow manages to stand out. The shine on the handle looks great and allows this tattoo to pop right off the skin. the red in the background forces you to pay attention to this little tattoo and draws your eyes right in. 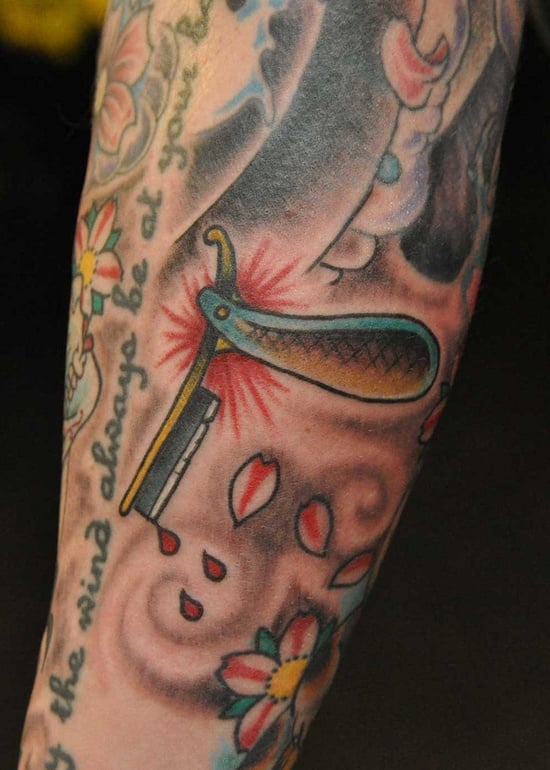 16. Now this is a well done tattoo. The amount of color and the amount of detail in this little tattoo is really impressive. The way that this tattoo artist added the perfect amount of white ink into the heart and surrounding pieces, gives this little tattoo a huge amount of character and shine. As the blood drips off of the straight edge razor blade, you cant help but be impressed with every part of this tattoo. The crown on the top and the flames that are rising up give this tattoo movement and the hidden spider web may even tell a story of where this person may have been at one point. 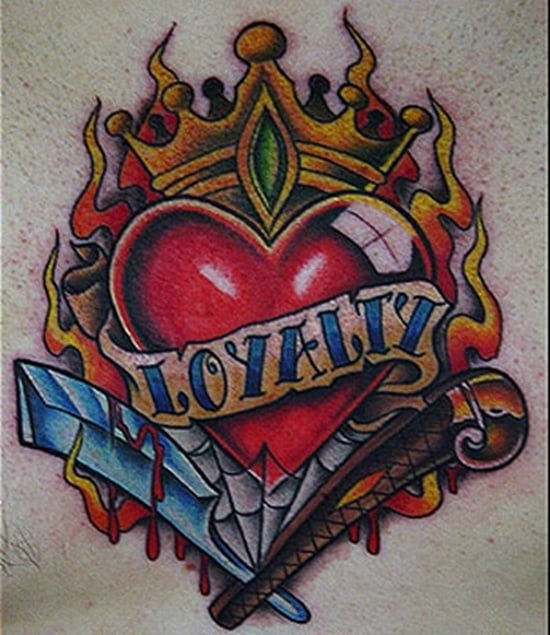 17. If you are looking for the perfect example of American traditional style tattooing, here is is. Everything about this tattoo screams of that style. The bold colors of the flowers, the spider web, and the bold line work are all staples of american traditional. The shading on the flowers and the handle of the straight edge razor is impressive and creates the perfect shadow. The spider web is a great back drop to bring this whole piece together. 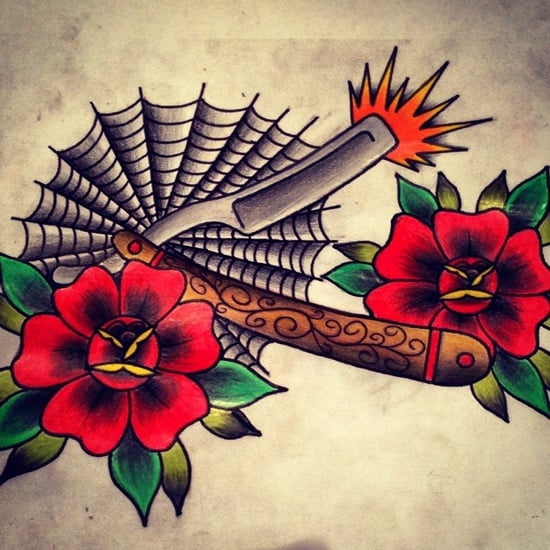 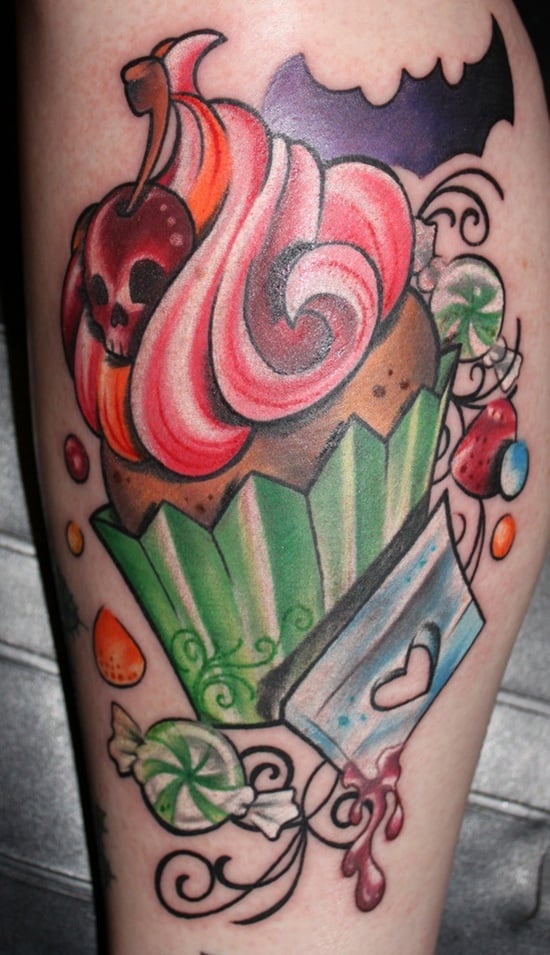 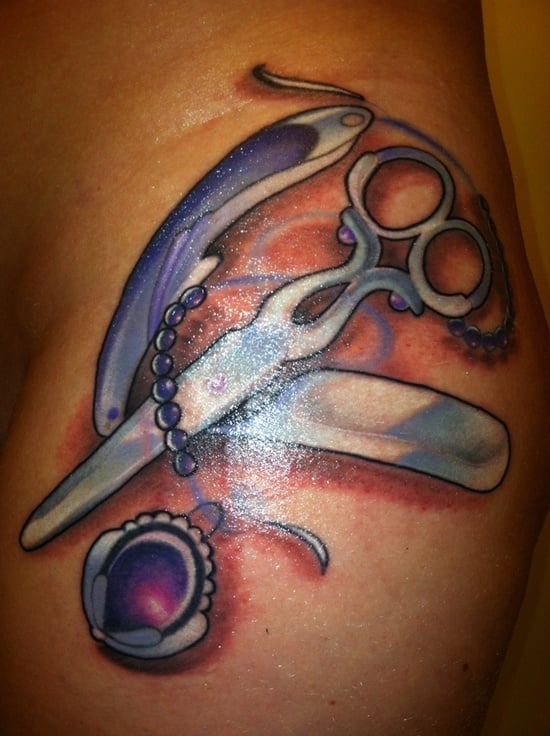 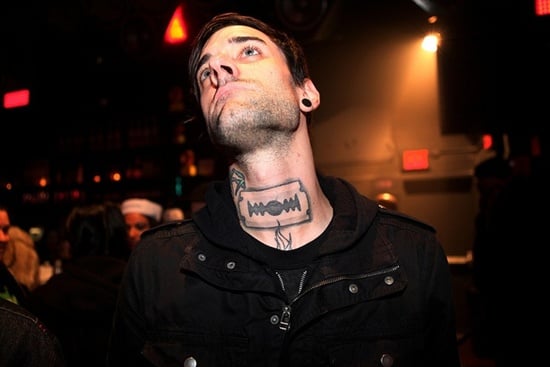 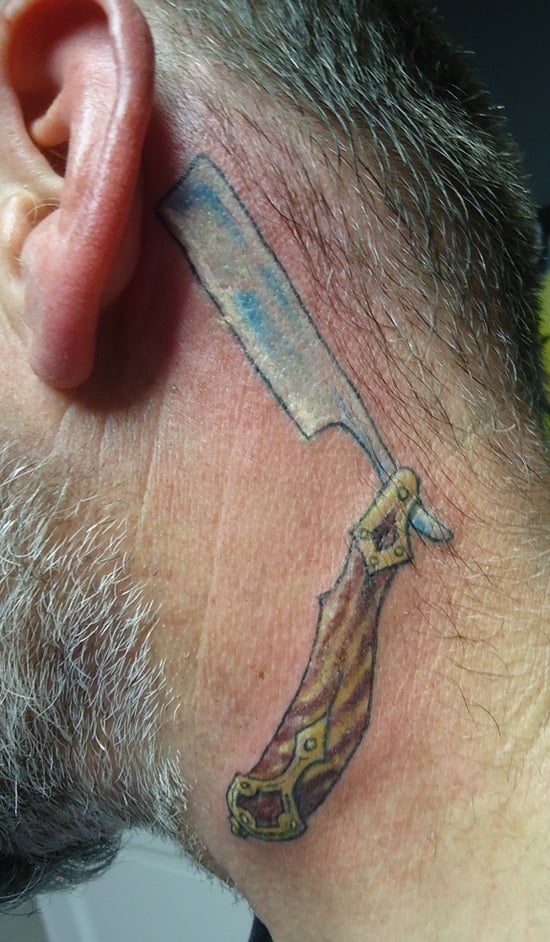 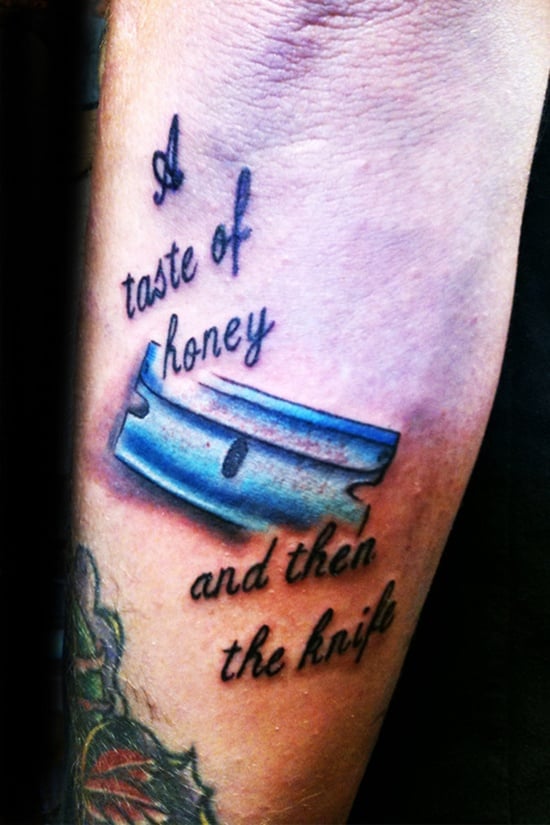 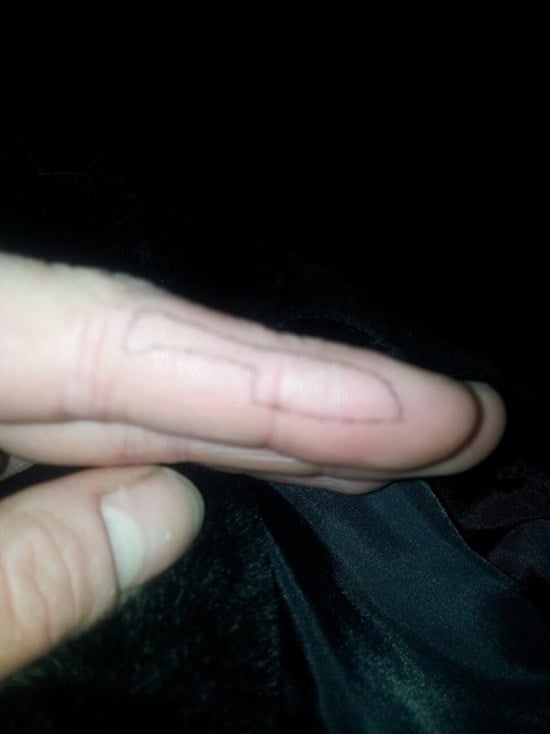 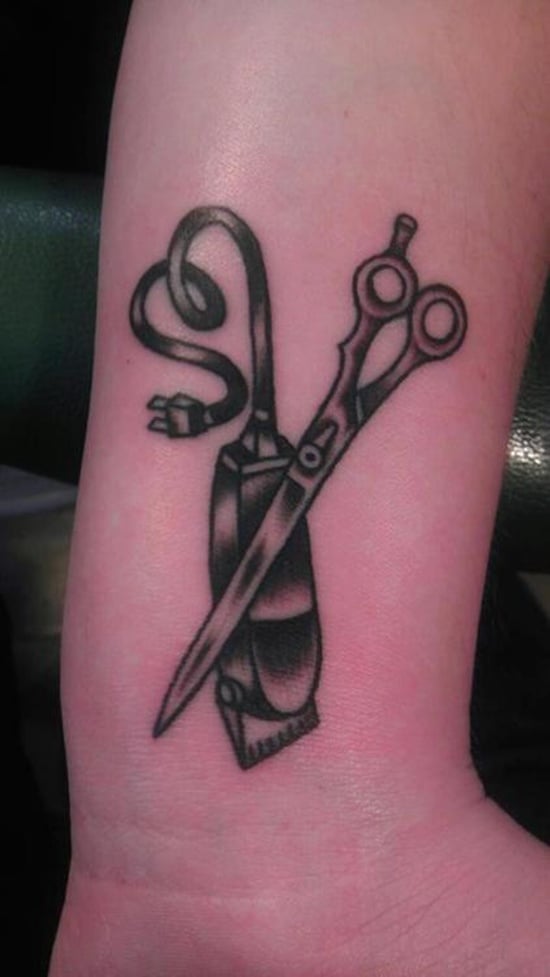 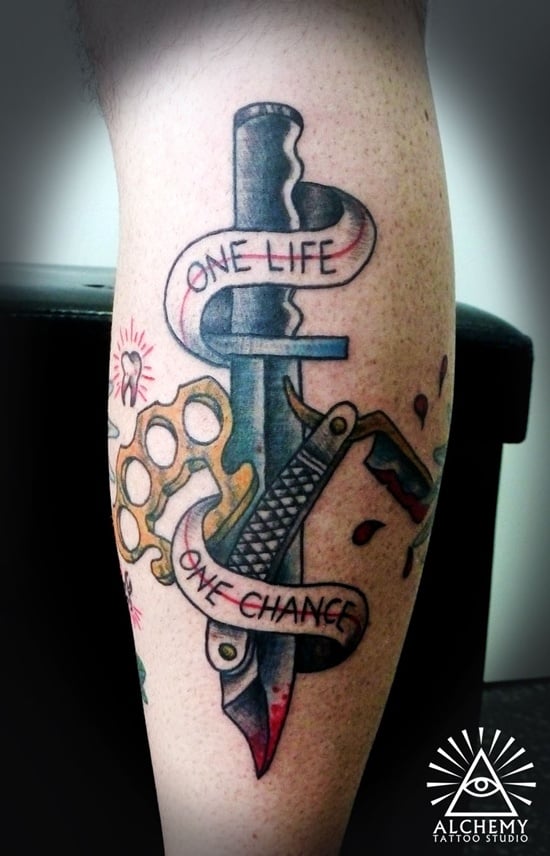