What do scarecrows actually stand for? Simply put they are scary looking contraptions that vaguely look like a human being put in the fields to scare the crows away. It is used to help farmers protect the birds pecking away at the grains.

But in the tattoo world,  these are used as macabre objects that have been featured as being horrible and maleficent in many a movie. They are known to be creatures that come to life in the dark to wreak destruction and kill for revenge.

Of course on the other hand you have a kind and lovable scarecrow in the “Wizard of Oz” who all of us love. Here you will see scarecrow tattoo designs that go through the whole range of legends that surround them.

Different Scarecrow Tattoo Designs:  The way these things have been shown in the movies,  make the people, who go for scarecrow tattoos, believe that these are loving creatures or totally evil.

Scarecrow Tattoo in green: This one is meant to be cute and funny due to the gestures that the scarecrow is seen to be doing in this tattoo. The addition of the ace of spades card adds a nice touch to the whole cool vibe this one is giving off. 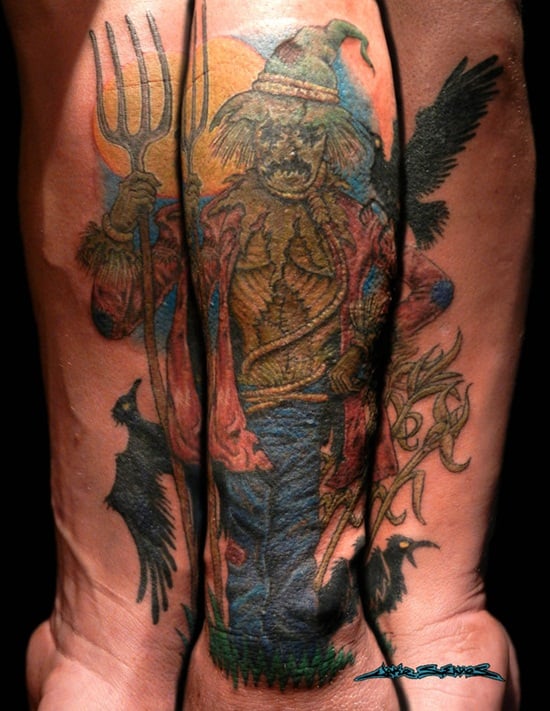 Tattoo of Wizard of Oz Scarecrow : This one is a fun scarecrow based on the one seen in Wizard of OZ. You have to like him and cheer him on and this scarecrow tattoo captures the essence of this cute character that we all loved 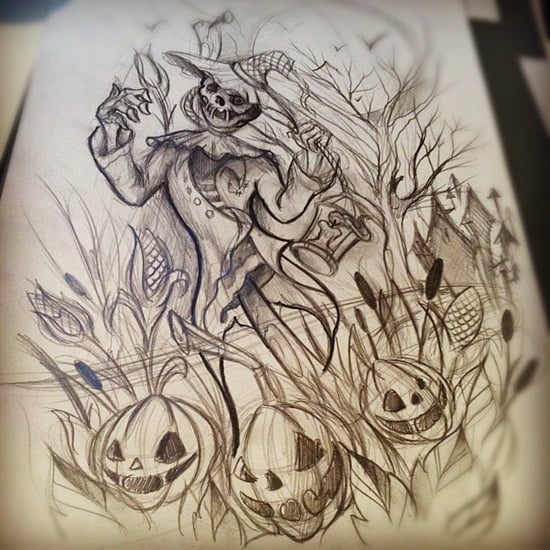 Scarecrow tattoo with Deer Antler: The fact is though the design is one of its kind, the deer antlers are something that one may have difficulty seeing in connection with the scarecrow tattoo. 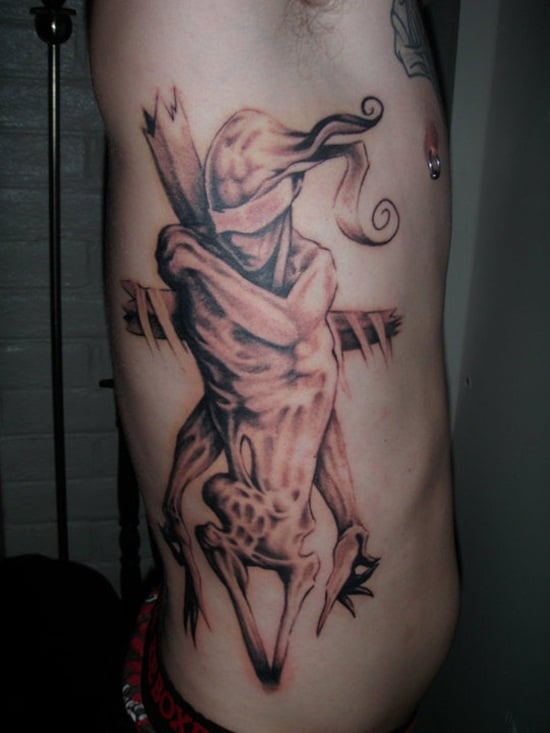 Creepy looking Scarecrow Tattoo: Now we are moving on to the evil and  vengeful aspect that scarecrows are shown as having. The tattoo shows this to good effect from the overall aspect of evil, the stitched mouth in addition to the awesome expression makes it really terrifying. The rope around its neck seems to be the final touch to the whole effect. 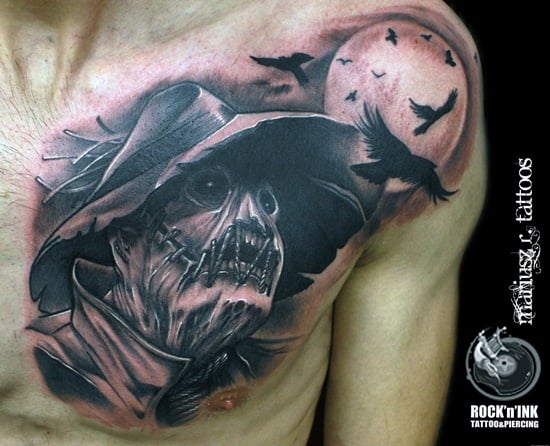 Halloween themed Scarecrow Tattoo:  The color and details in this one makes it stand out, though this sort of figure is something that most of us get to see during the Halloween season. The addition of flowers, weeds etc makes it look authentic. It could definitely work as a scary visual.

Evil Scarecrow topped with Pumpkin Head: This one manages to pull the really scary look in spite of the addition of the benign looking pumpkin head. With the addition of details like tattered cloths, hat and the expression this one has a evil spirit like feel about him. Scythe Holding Scarecrow Tattoo: This one shows the true face of horrific death with dark holes for eyes. The nose and mouth also manage to add to the horror. The misty wisps around the legs add to the other worldly feel of the whole scarecrow that somehow is holding the scythe of death. 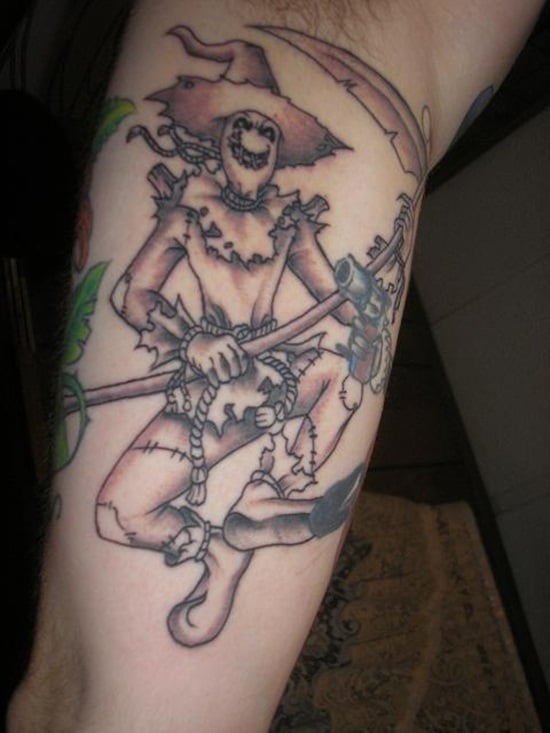 The thing is that,  this tattoo can look totally different based on where and how you portray it. You could go with color or do it in black ink for dramatic effect. Once again the tattoo should  look like and portray what you want it to look like and make others feel the same as they look at it.

On the whole though scarecrows may seem like an odd choice for tattoo designs, one cannot deny how compelling and fascinating they can be. You can decide to portray the scarecrow as you visualize it in your mind’s eye – evil or good. Here are some great ideas of  Scary scarecrow Tattoos : 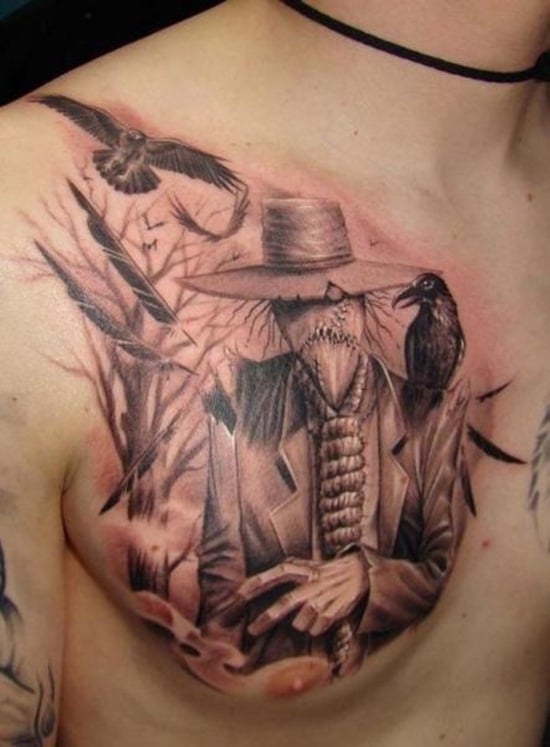 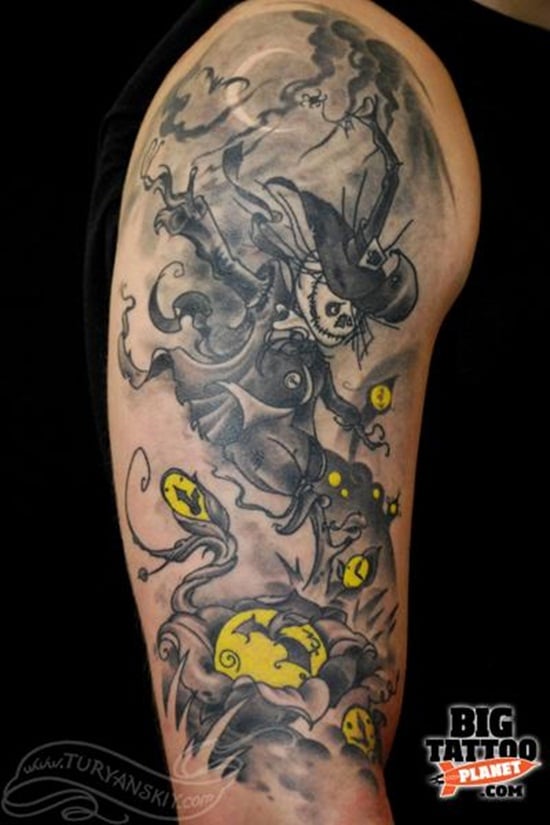 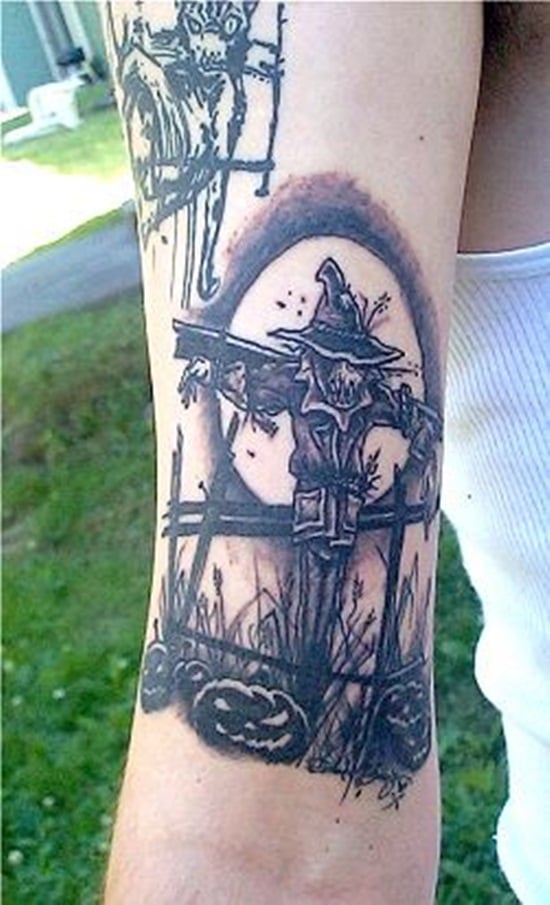 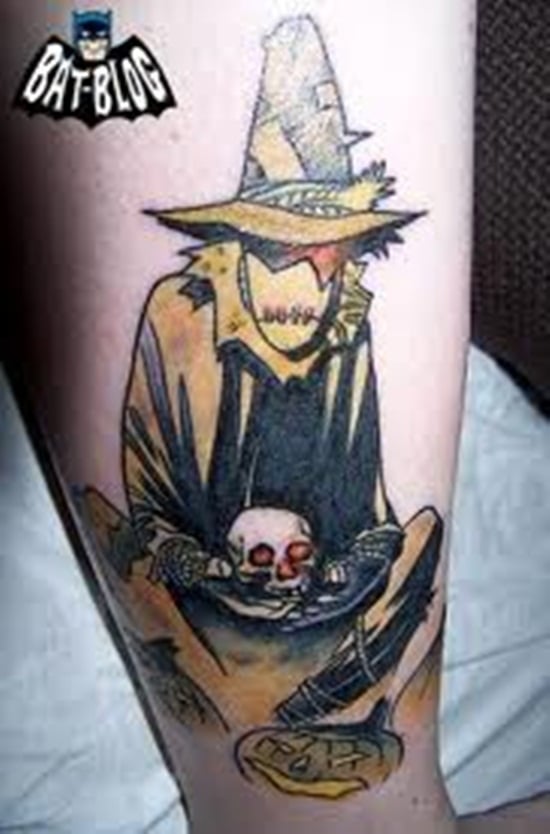 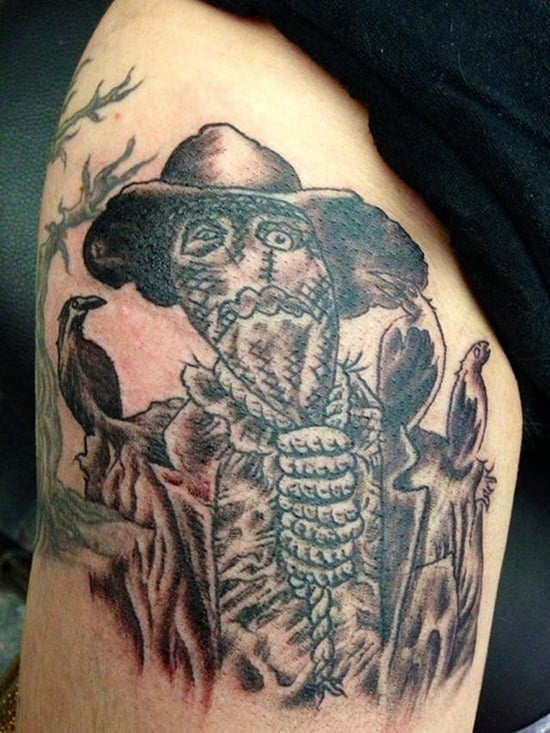 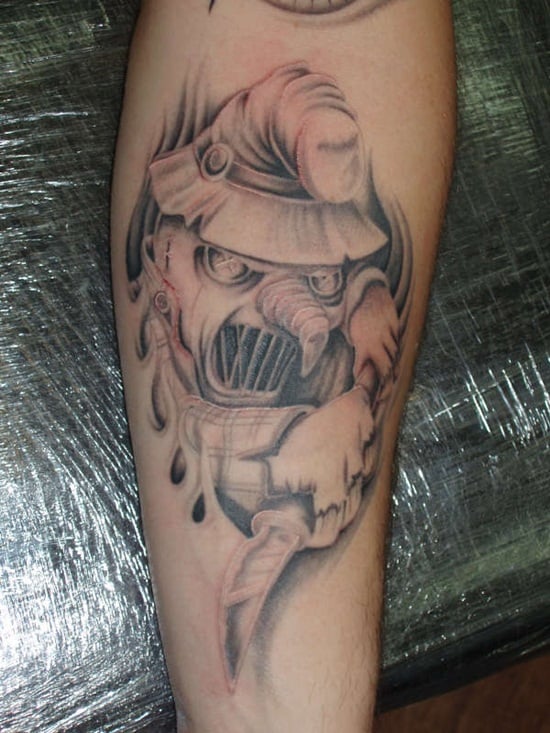 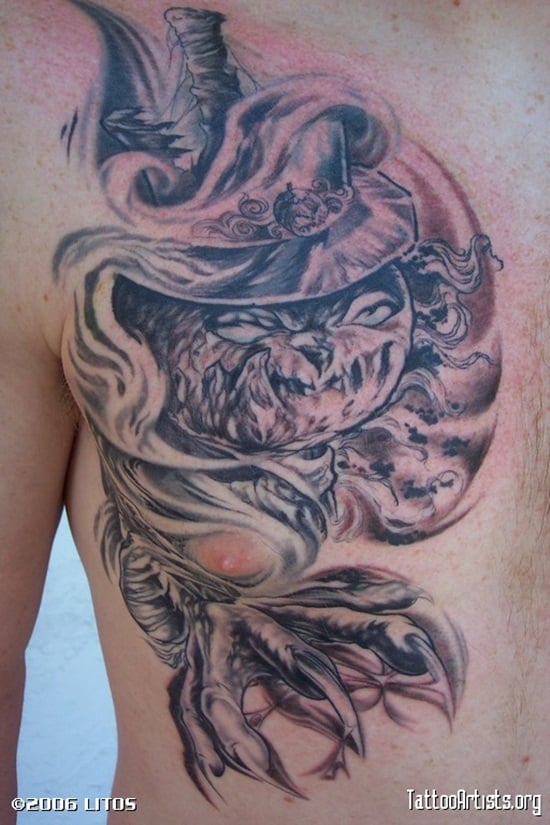 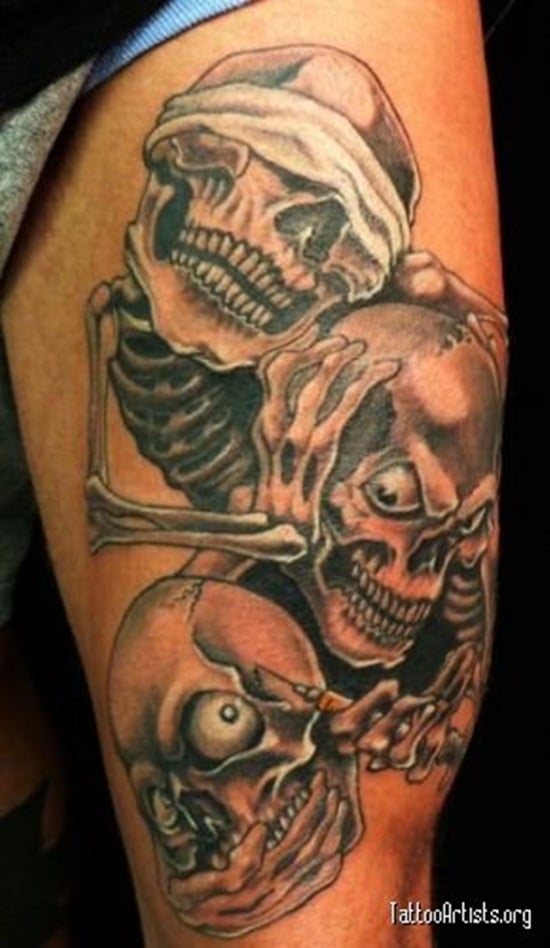 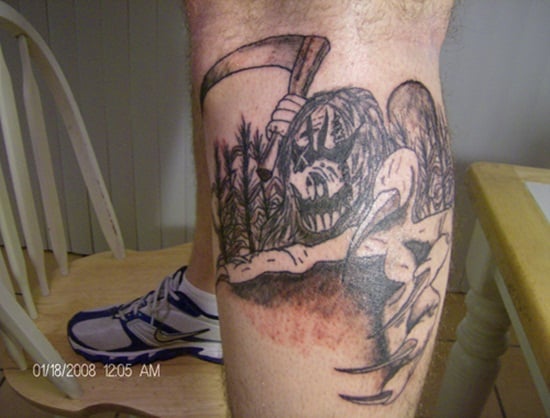 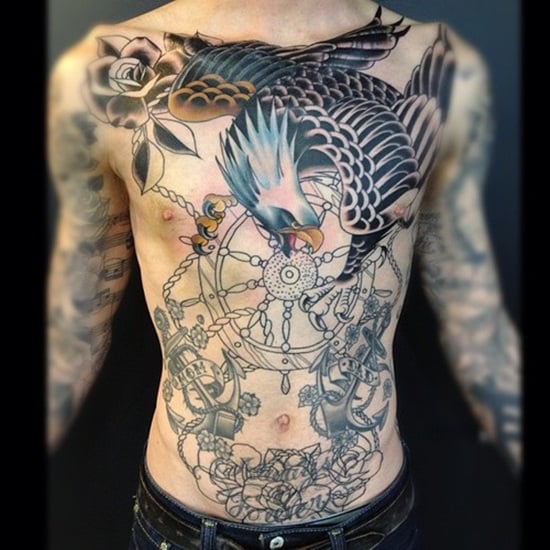 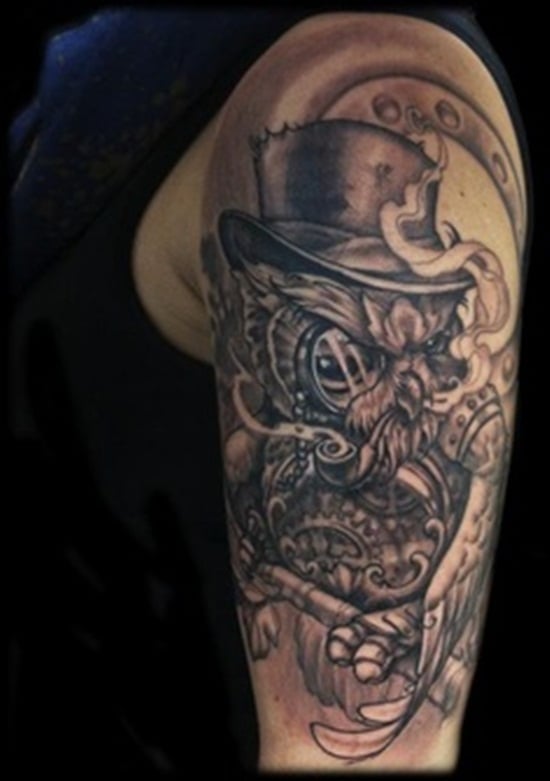