Home Tattoo Ideas 20 Tinkerbell Tattoos and What They Represent

Tinkerbell, the playful fairy lives on! Whether you’re a fan of the original Peter Pan animation, Julia Roberts in Hook, or the new lineup in Pan, Tinkerbell reminds us all that we can be playful and watchful at the same time. Getting Tinkerbell inked is a great idea if you’ve ever felt this way before.

There are certain iconic images in movies, films, and popular culture that are recognizable upon first glance. Tinkerbell is one. The feisty fairy of Peter Pan, this little blonde nymph harkens back to a childhood that may be long past. Cute, petite, and with a solid fan base with both adults and children, Tinkerbell is more than just a character but a true entity all on her own. It is no wonder, then, that little miss Tinkerbell is a popular option in body art as well. Here little body has been tattooed on thousands of clients from around the world and it is likely that she will be flying onto the arms, legs, and backs of tattoo aficionados for years to come. 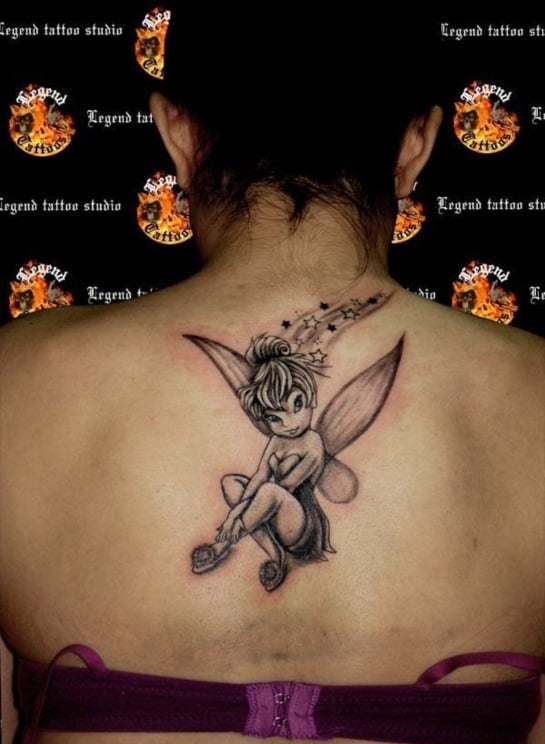 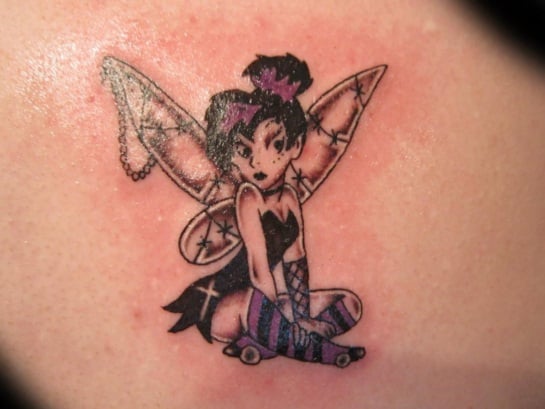 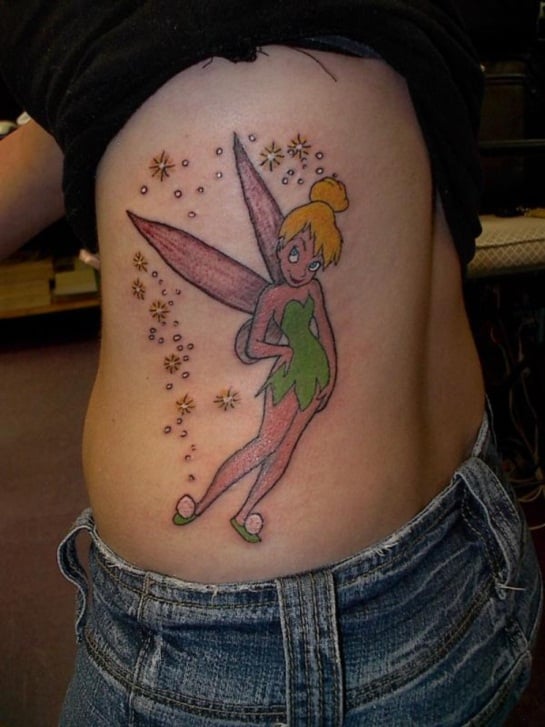 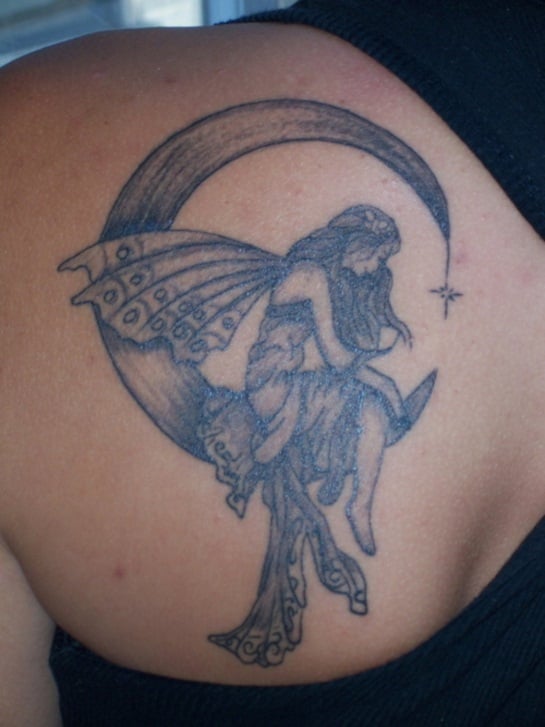 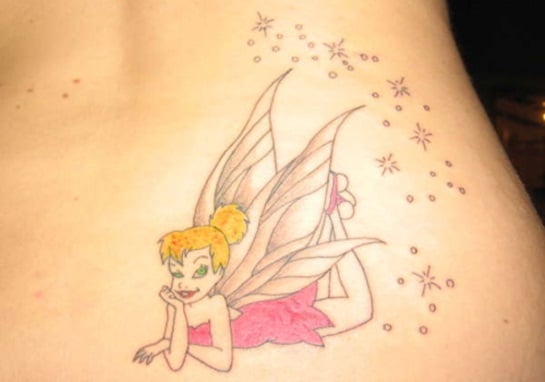 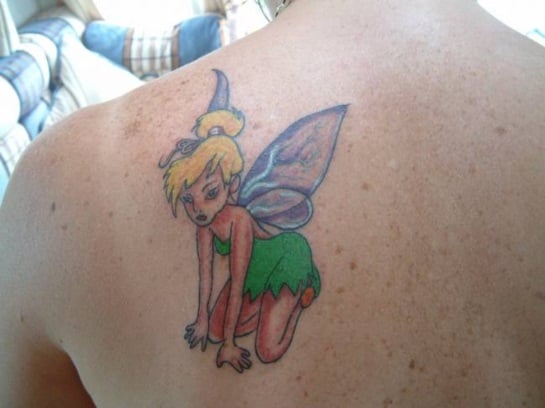 One of the reasons that the little fairy is so popular is that she is more than just a children’s character. She is an icon for those that want a sense of whimsy and majesty but strength. There are groups and fan pages dedicated solely to the green dressed fairy and this helps to promote her prevalence in tattoo parlors and body art circles. She represents something mystical and fun for all ages and has been an inspiration to stubborn and hardheaded women looking to make their own way for years and years. Demureness and grace are one of the reasons that this culture, and her use as a tattoo, has grown and grown. 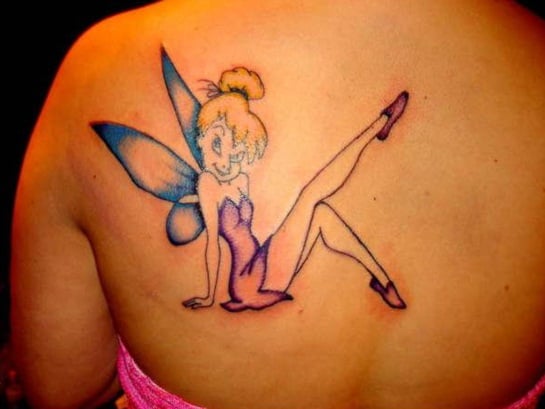 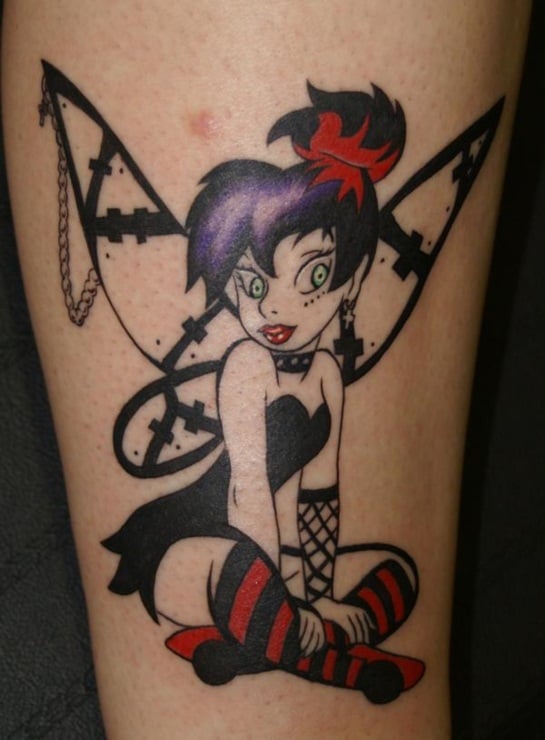 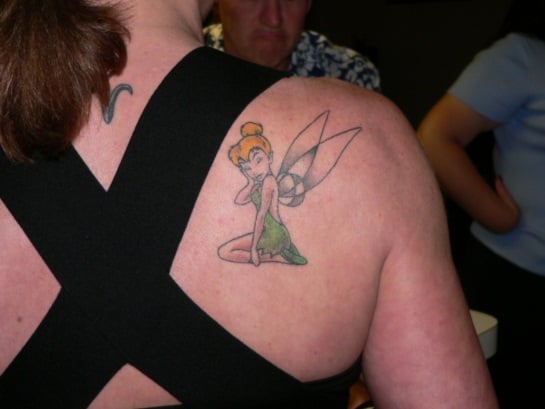 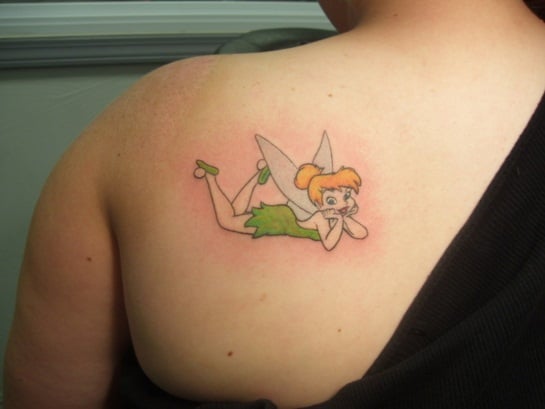 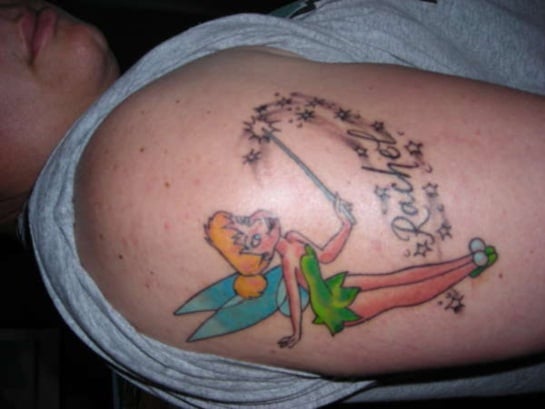 While artists and tattoos can be as diverse as you want them, there are certain traditional colors that have been used in these tattoos for many years. Specifically and traditionally, the little fairy has had blond hair and big eyes, either blue or green. In much the same way, the dress and shoes worn by the little fairy also tend to stay in the same green, yellow, and white dress that you see her dance across the television in. The subdued color palette shouldn’t make you think that this is not a dynamic option in tattooing. Actually, the greens and yellows can really pop against the skin and make a statement that is both eye catching and demure all at the same time. It is also a popular option to get the outline of Tinkerbell in tattoos but this is less vivacious in the colors and stands out in the details alone. It is completely up to the individual and the artist to decide what works best.

While Tinkerbell is known for her distinct style, it is her facial expressions that often create the most quintessential Tinkerbell moments. The beautiful fairy with her legs dangling often gives a coy wink or a little smirk in her tattoo depiction. This sums up the little fairy pretty well but is not the only facial expression that is popular in her portrayal. On the contrary, she is also popular for having her arms crossed and a tough little look on her face that shows the contrast between the softness of her fairy character and the strength of her personality. With bun situated atop her little head, this is another popular look for the little diva. 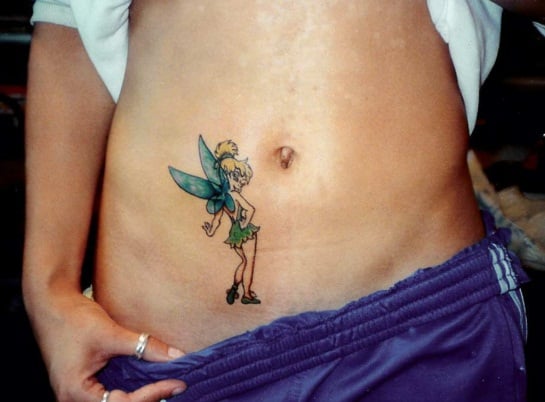 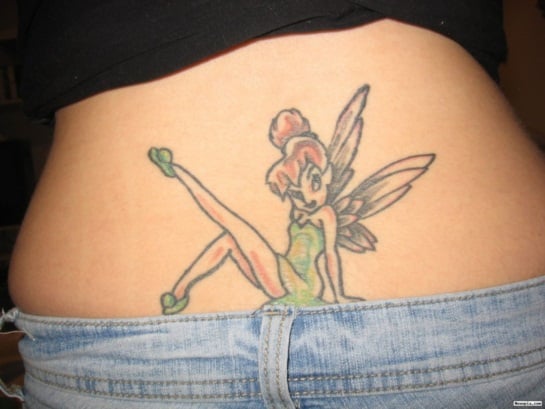 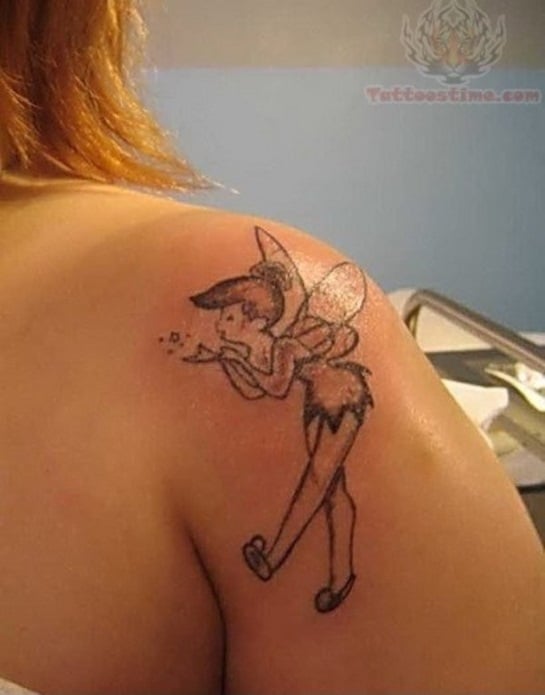 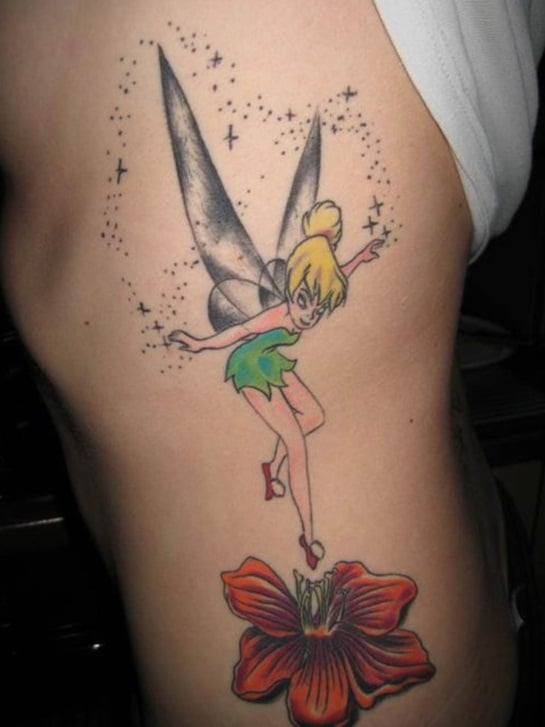 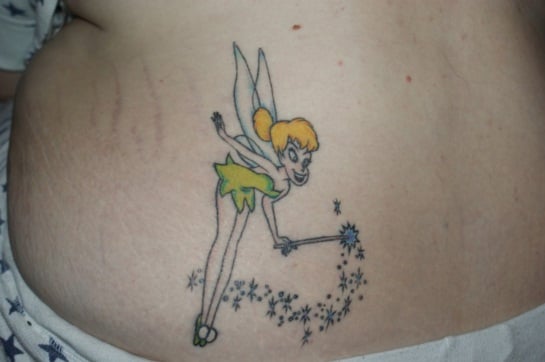 Because Tinkerbell tattoos are popular, they also go on nearly every part of the body. From the back to the hand to the foot to the ankle, literally there is no place that has been untouched by Tinkerbell’s wings. Her size, too, can vary based upon the location and what the client wants. If you want a brightly colored placement that gets you noticed, go bigger. If you want to retain the fairy spirit, locate her in a place that is going to fit for her smaller frame. Regardless, the magical fairy can go anywhere and fly to any zone as long as the artist and client are in agreement. 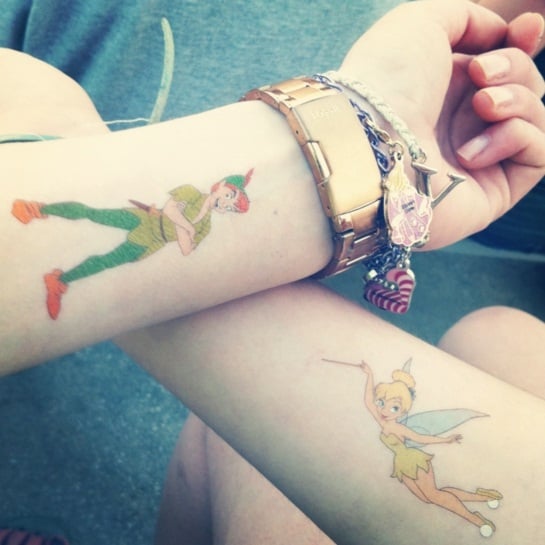 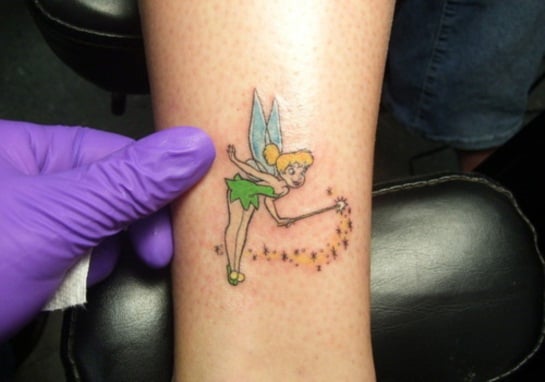 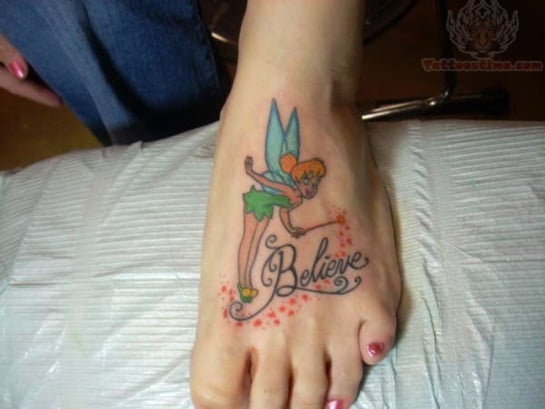 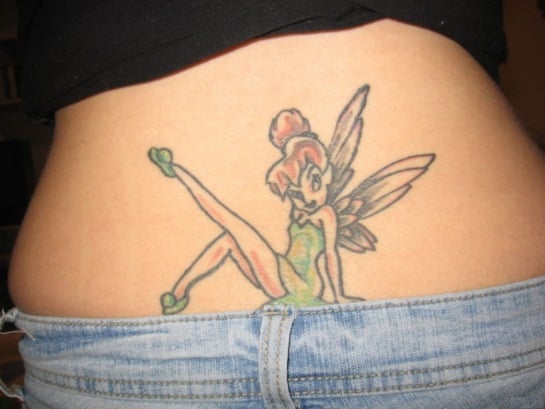 Though you do not need to be female in order to wear Tinkerbell tattoos, it is a more popular option for women. Both young and old alike can relate to the little fairy and that is why she has become iconic to females from around the world. Though it is not as likely that you will see her on the shoulder of a man, it is completely up to the individual and the tattoo artist to decide what works best. Something tells me the Tinkerbell spirit can transcend gender as much as the popularity of Tinkerbell tattoos has transcended socioeconomic lines.