Warriors are popular tattoos which can be designed in an infinite number of forms.  A quick look on different websites for tattoos will give you a repertoire of factual and mythical warriors.  They are valued for the artistic part and the symbolism they offer.   Warriors tattoos are usually done by men, although we do find a few nice warriors tattoed on females.

If you are looking to put a warrior tattoo design on any part of your body, your biggest problem is ‘choice’.  There are so many aspects you can look at, that it is very important that you perform a thorough research so your end decision will be one that will keep you proud and happy for many years.

Warrior designs are period oriented, geographically located, real or fictitious, and even made up by the person who will be doing the tattoo.  An important aspect of the warrior tattoo is the armor and tools he carries.  The majority of warriors are men but as can be seen from the pictures below, we can occasionally encounter a beautiful female warrior. A popular female warrior is Pocahontas.

The choice of warrior tattoo designs is so vast that you will need time to make up your mind which warrior best describes you and your feelings. You can choose from Holy warriors, Greek warriors, Aztec warriors, Roman warriors, Celtic warriors, and Vikings, all of which represent a different aspect of war.

Other interesting additions to your tattoo are the weapons which range from the normal bow to the crossbows, spears, shields, different type of swords and also the armor and crests.  It is very important that the correct armor is used with the kind of warrior you choose.  You cannot include a crest which belongs to another era or is known to be the property of a different warrior.

Last but not least, one should also look at the positioning of the warrior.  Usually, the warrior is tattooed standing on top of his enemy to show victory.  Other warriors are shown in action, or on a bloody field.  Most of the time the person who wants a warrior as a tattoo is looking for an aspect that shows his fighting spirit, bravery and courage, skill and strategy, his fearless character, power, aggressiveness and authority.  Which one depicts you? 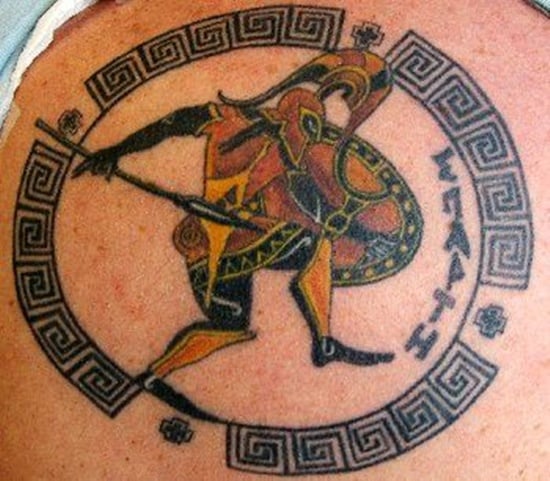 The tattoo above shows a historical warrior in a circular enclosure which is usually connected with Greek or Religious designs.  The world wealth might indicate that the tattoo owner wants to fight for what is his own or to make a fortune. 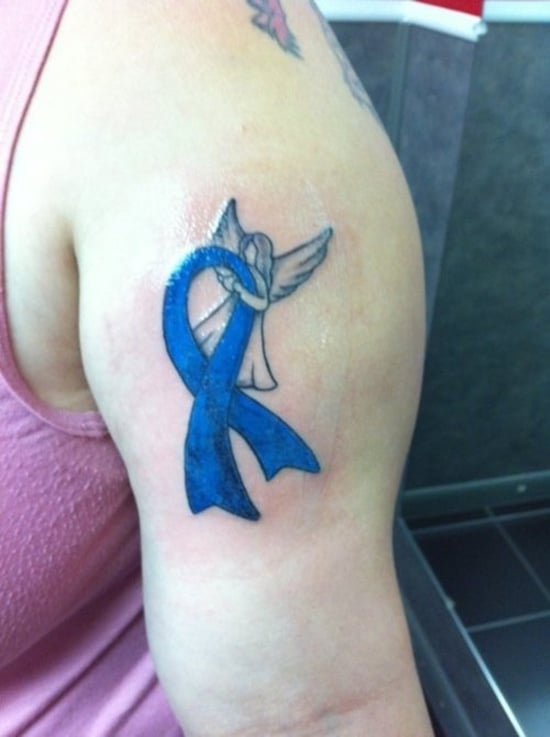 Blue ribbons are connected to many different awareness campaigns.  Of interest to us in the battle zone are the meaning of support for the Hong Kong Police, the fight for freedom of speech and peace.   The fact that the ribbon is being held by an angel might represent a person who died fighting for some kind of common good. 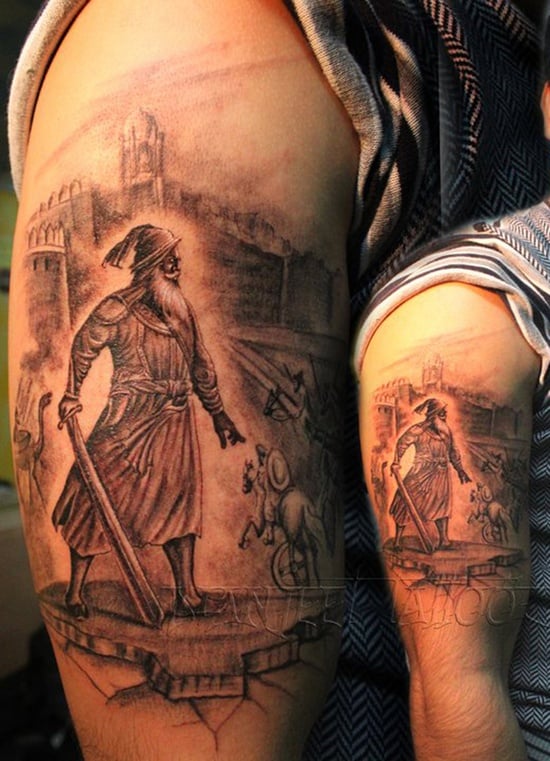 Images of warriors whether as tattoos, in art, books or films can be found in various forms.  Amongst the choice of warriors, some common ones are the Roman Warriors, Greek Warriors, Angelic warriors, the Celtic warriors and Aztec warriors. 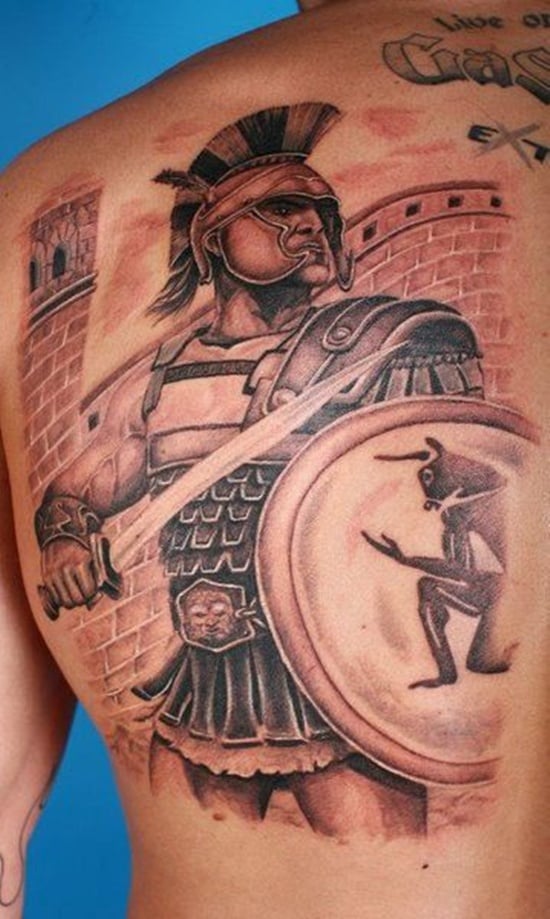 Above we can see a back tattoo (one side) which shows a Roman Warrior in all his glory including his armor and sword.  Of particular interest in this tattoo is the warrior’s expression which shows determination to win.  The designer here also included a background which makes the tattoo very busy and full. 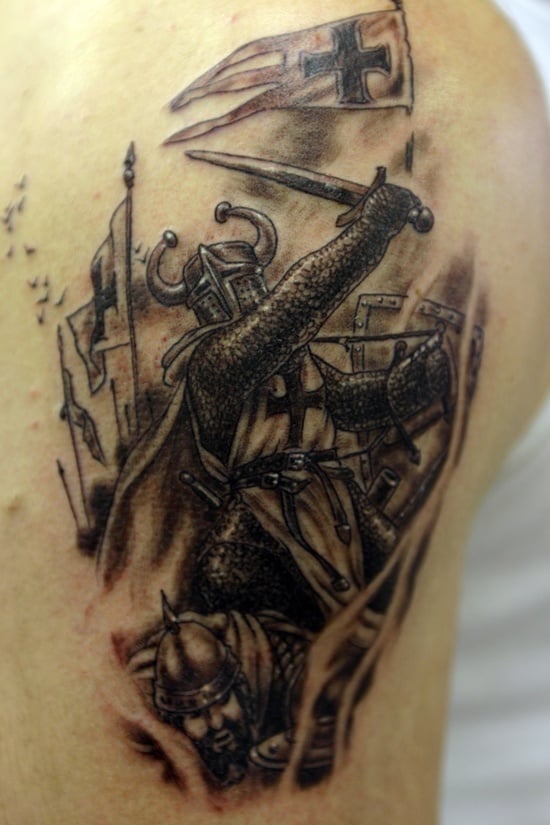 A typical English Warrior with the flag high above showing victory over the fallen soldier underneath the feet of the main character.  The tattoo is in monotone however it has interesting lines, shadows and detail. 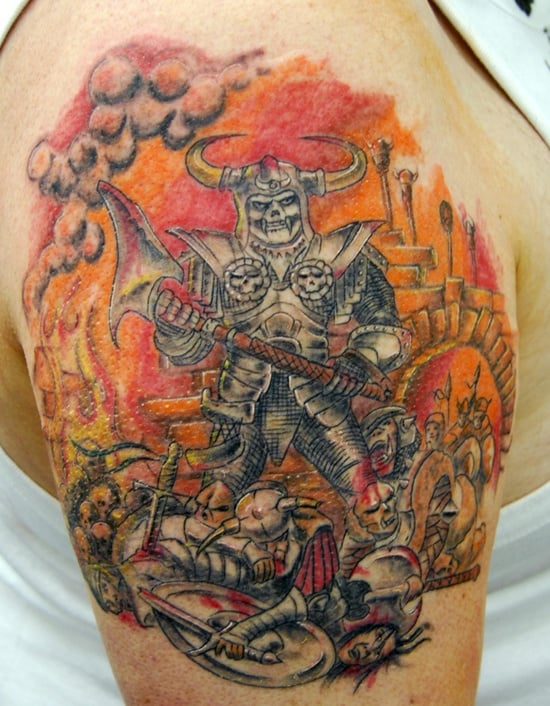 On the contrary, the one above is a very coloured tattoo emphasising the orange and the red.  Two colours connected with blood, danger and war.  Again we can see the fallen fighters on the ground being trampled upon by the victorious warrior. 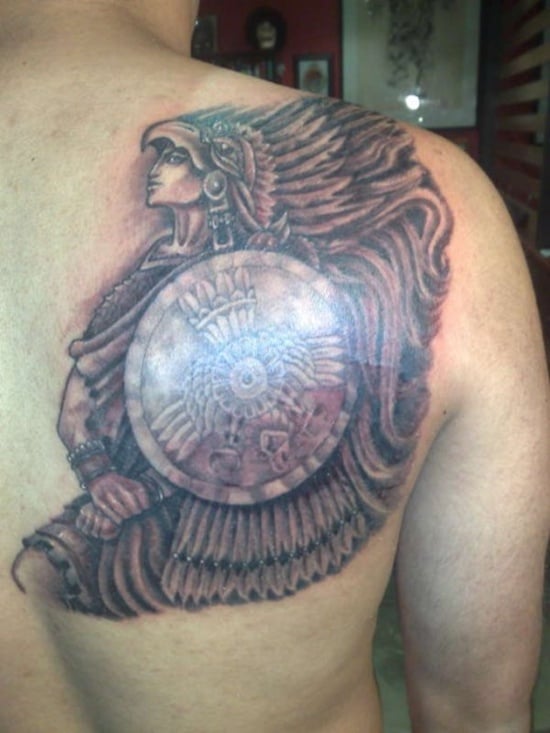 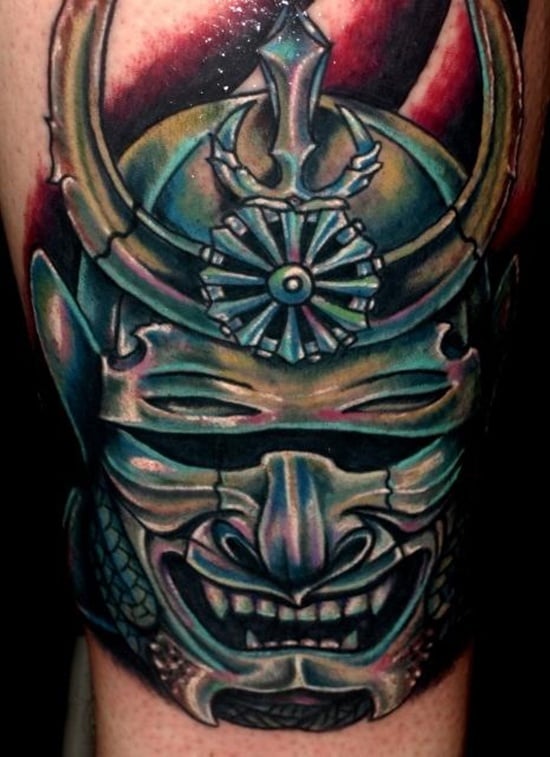 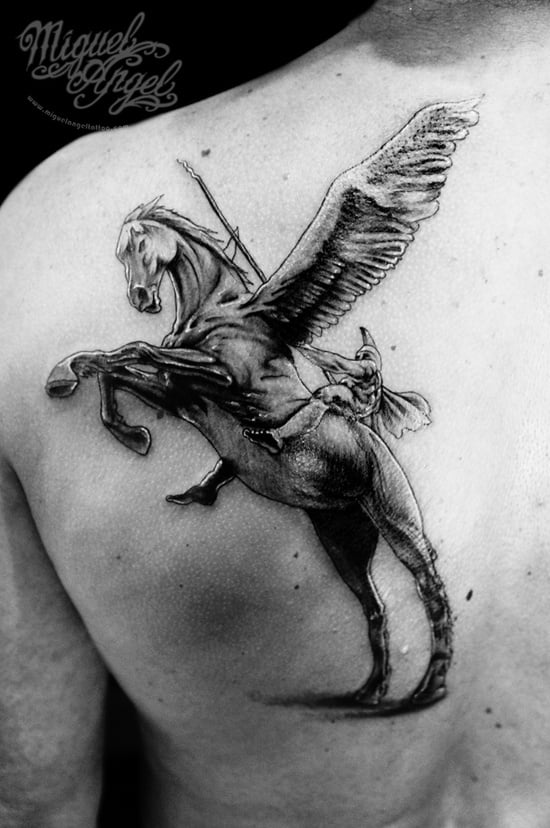 In this tattoo, the focus is on the animal rather than the warrior, which as one might understand had a very important role in wars.  The human seems insignificant here and when you look at the animals legs you will notice that it is depicted as a mythical creature. 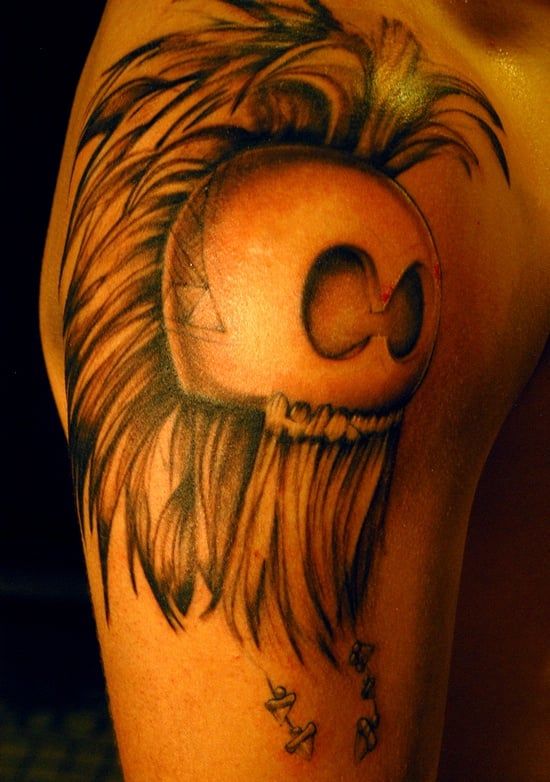 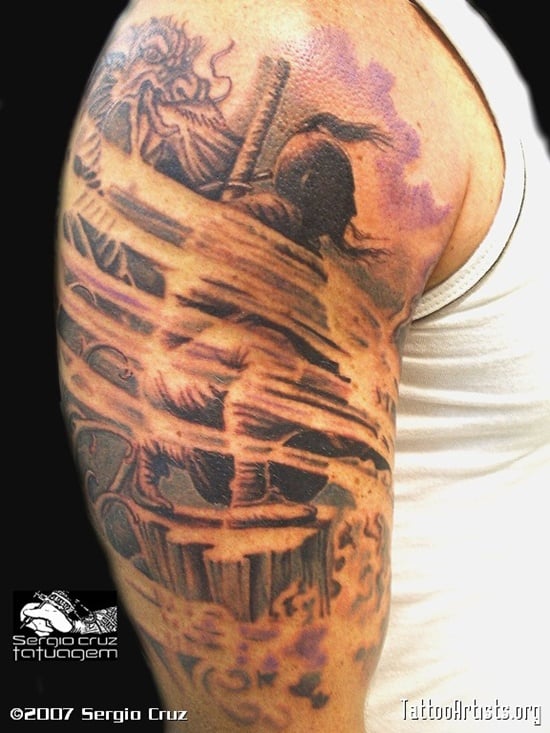 What is really interesting in the tattoo above is the lines across the tattoo which make it dynamic.  There is movement along the arm which make the viewers eyes move from one side to the other taking in every detail. 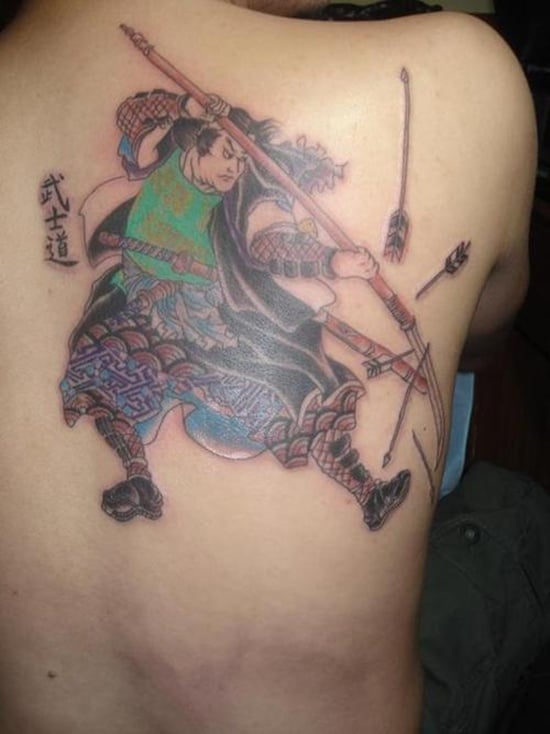 The tattoo above shows a far east traditional warrior fighting successfully an assault by arrows.  These warriors are known for their quick skills in fighting the enemy with simple tools such as the ones above. 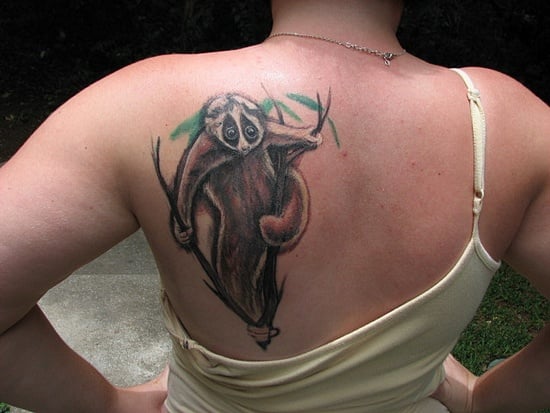 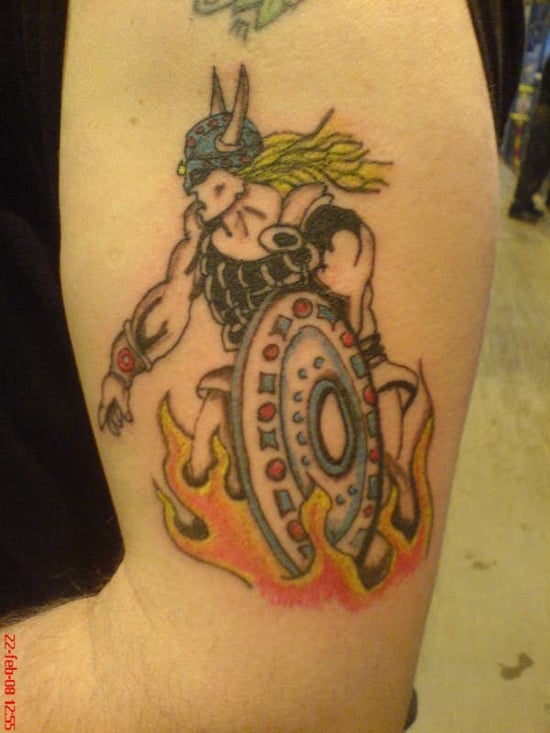 Warrior tattoos can be done on any part of the body.  Obviously larger tattoos need to be done on the back which allows for a bigger more detailed design. 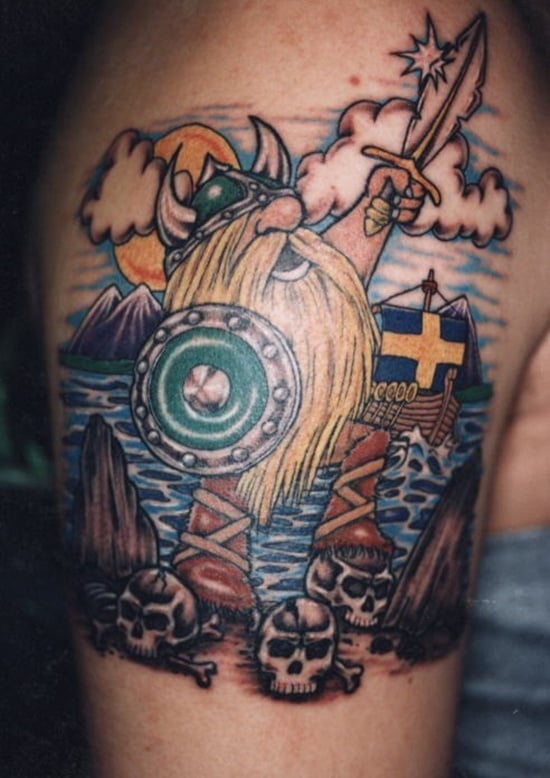 A popular cartoon warrior is Asterix the Viking and he can be found in various forms of tattoos such as the one above. 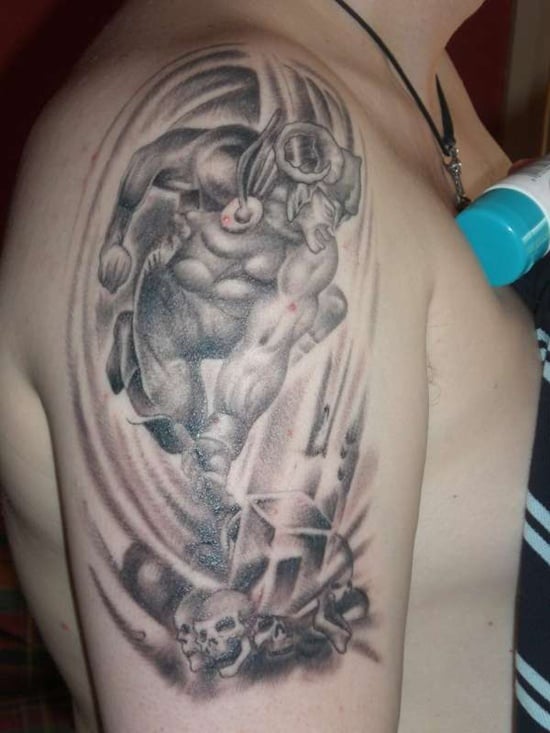 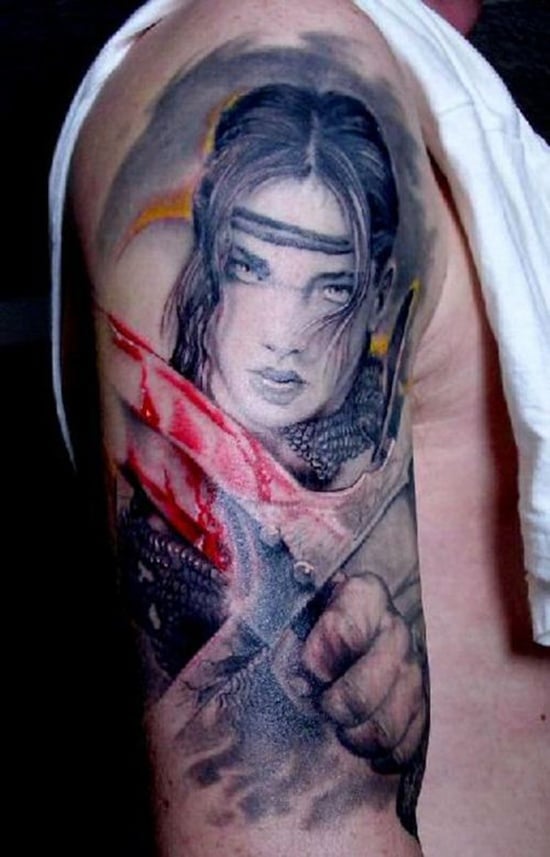 A woman warrior. If you browse the internet you will find woman warriors, however, they are clearly outnumbered by the other gender.  This is because in reality, especially in the olden times, woman warriors were not common.  Notwithstanding that, they seem to attract some people and can be found as tattoos.  It is very usual for these women to be extremely beautiful with penetrating eyes and full lips, making them unique warriors. 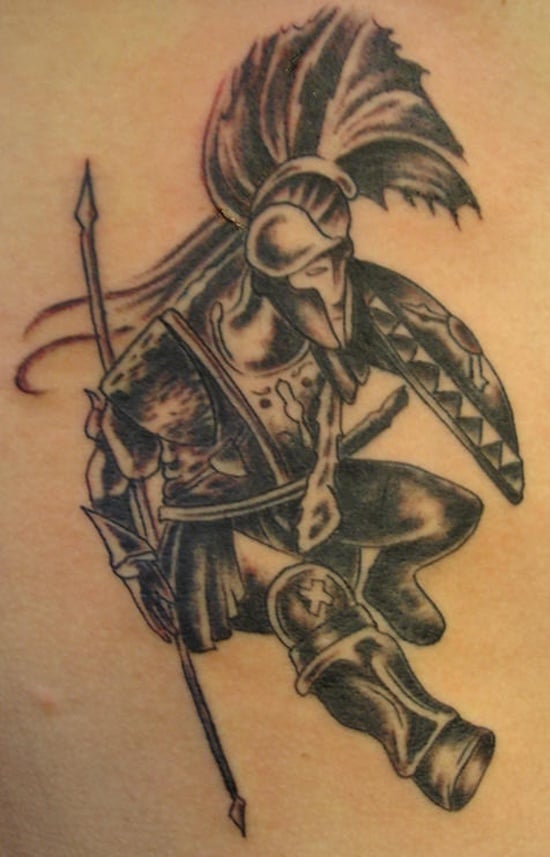 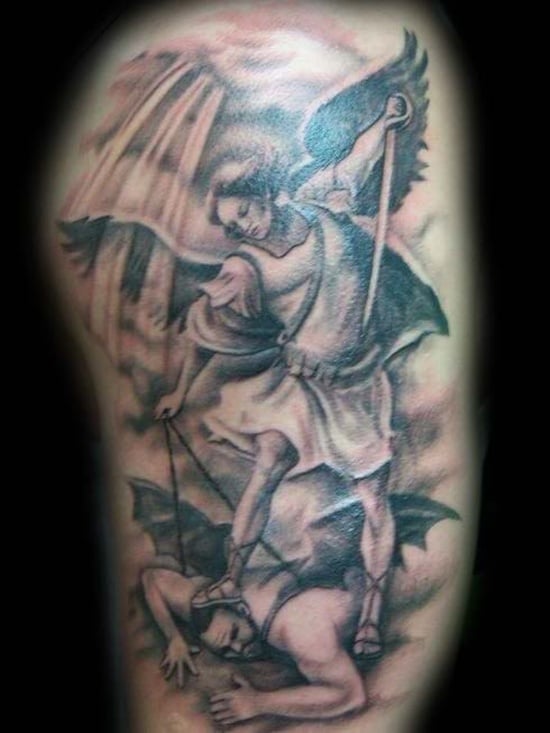 This is a tattoo which is ideal for those who believe that the good always prevails over the bad.  Here we see Lucifer being trampled by the Archangel under the guidance of God which is depicted as the rays coming out of the cloud.  A beautiful design which many people seem to be attracted to. 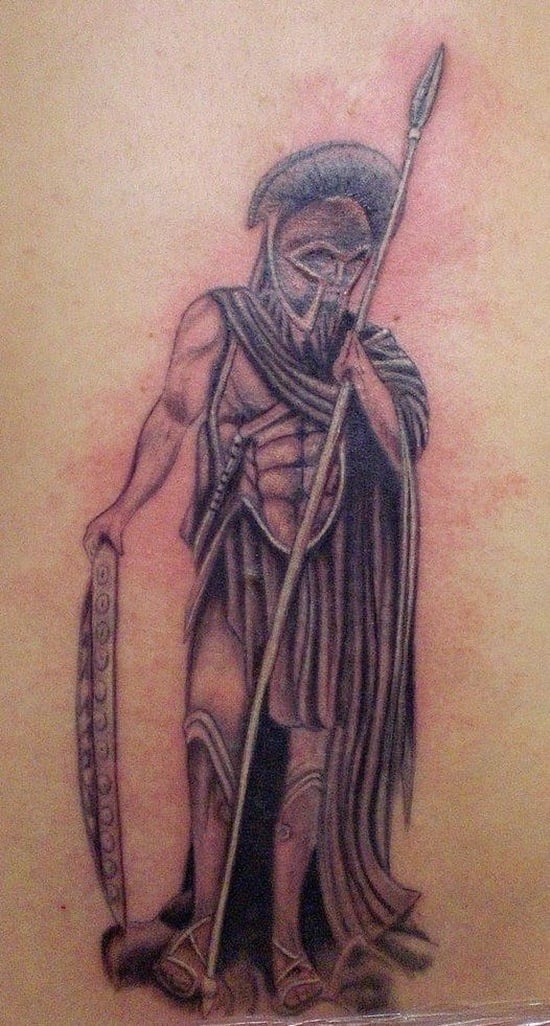 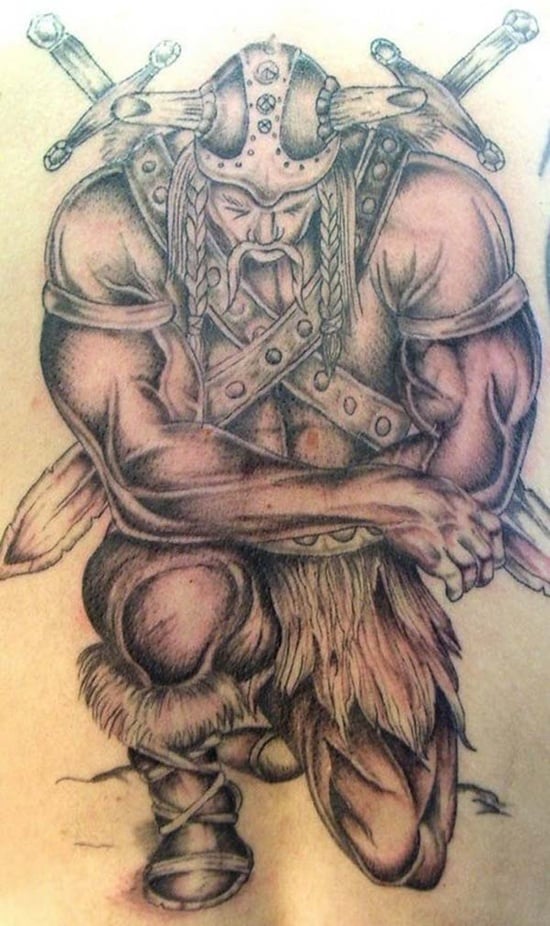 A contemplating warrior!  While the meaning of this can vary, what is definite here is the masculinity of the fighter and the artist’s skill to bring out the curvatures of the muscles. 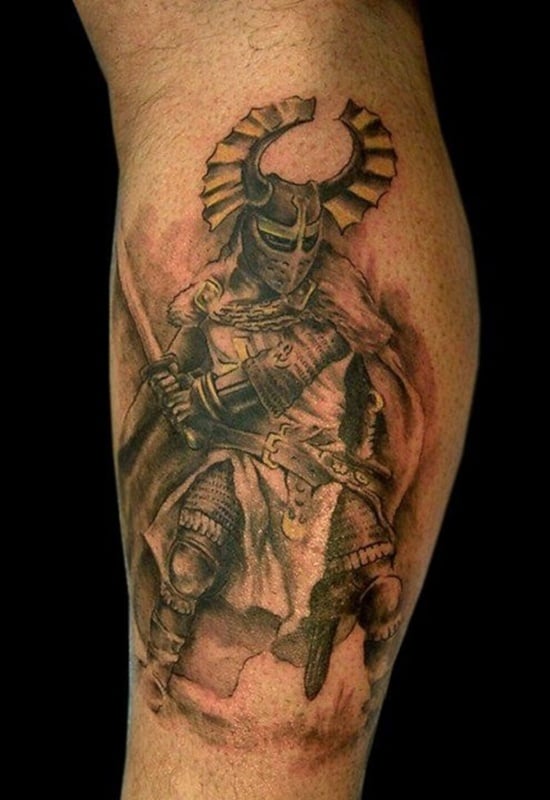 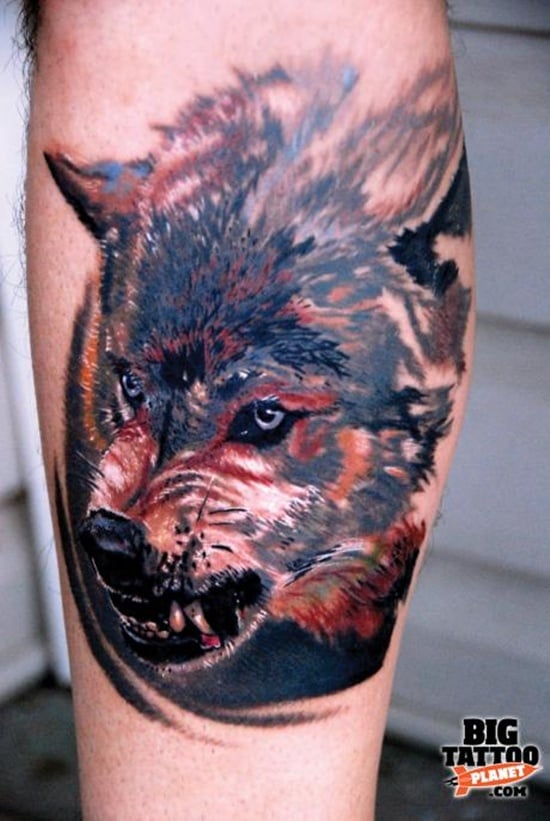 While this tattoo does not exactly speak of warriors or war as we understand it, this animal is definitely at war with whatever it is looking for.  The tattoo artist made a very good job in the work of the animal’s fair which include various colours that blend so well together.  This is a good tattoo for someone who compares himself with a particular animal. 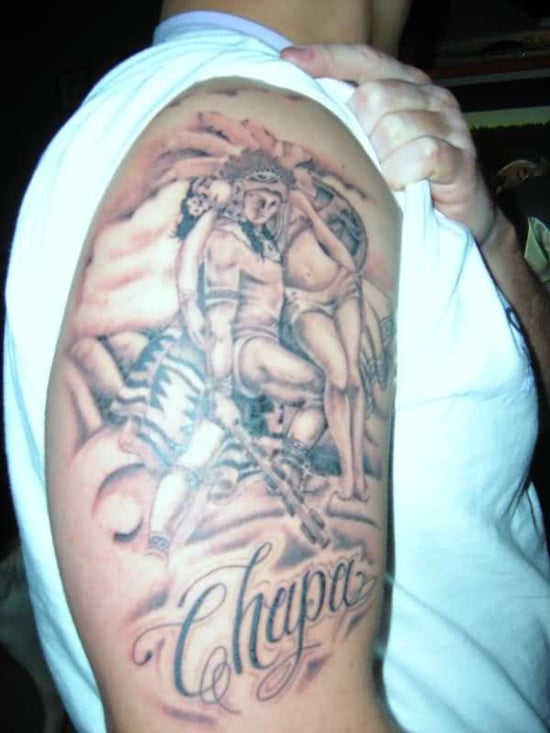 An uncommon tattoo of a romantic nature showing a warrior with a lover.  Might be expressing the feeling felt by lovers when they are reunited after a war. 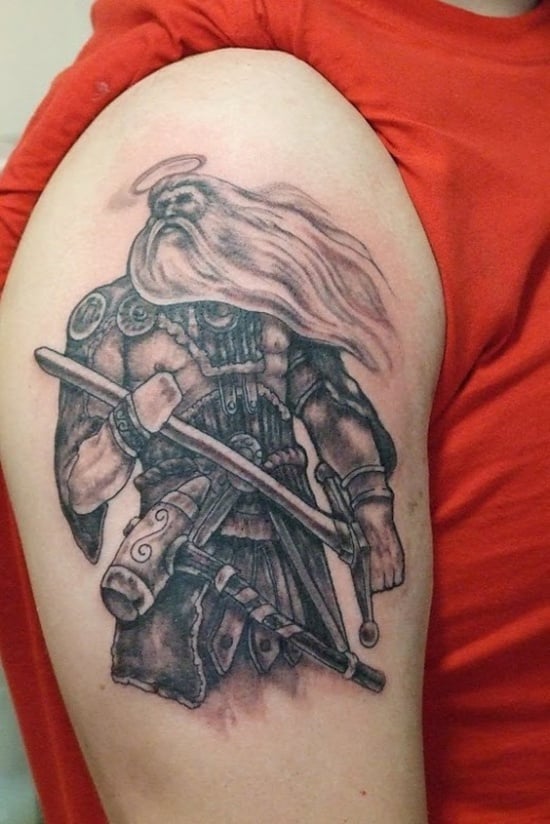 Each one of us is a warrior at heart, but whether we want to put this in the form of a tattoo on our skin is another story. If you are a fighter, want to portray some kind of anger, or admire the past and present warriors or soldiers, this might work perfectly for you.  You might also be interested in different armour, fighting gear or the shiny swords used in wars.  Another genre of such tattoos is movie fighters, which are also commonly asked for as tattoos.  Whatever it is, carriers of warrior tattoos definitely have a fighting spirit they want to share with the rest of the world.