When they designed My Little Pony back in the 1980s, we bet they never thought they’d still have a hit on their hands now – and we bet that they didn’t think little girls all over the world would grow up to get My Little Pony tattoos. But they did! An instant classic, these My Little Pony designs are just too cute.

The My Little Pony is one thing that became an instant hit with small girls from the early eighties when the toys first came out. Since then it has been 30 years and still the cute little ponies still continue to be popular . Those among us who wish to retain that bit of their childhood even as a grownup may find this My little pony tattoo very attractive. Since the theme in question is equestrian the choices for designs is really huge in terms of the poses and colors. 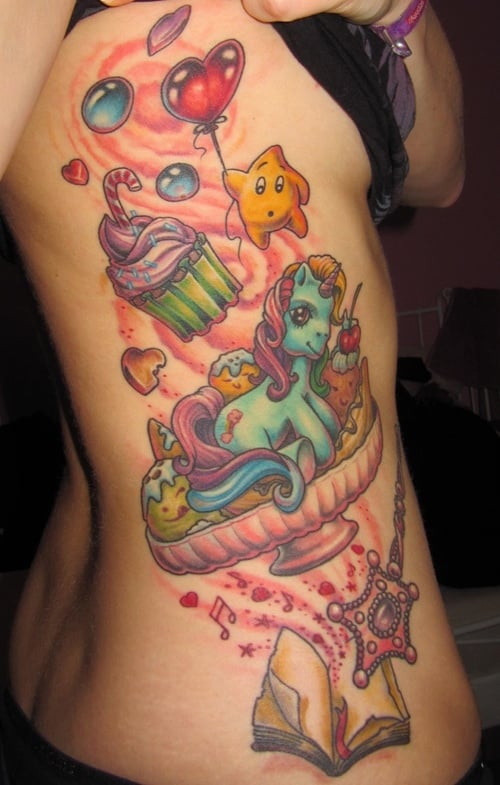 But in general, women who like this pony design prefer to keep to the original image as much as possible. After all with such cute names like Scootaloo, Sweetie Belle, Princess Celestia, Pinkie Pie and Rainbow dash, who can really forget these cute things?  The elements of innocent childhood and fantasy that are associated with the My Little Pony designs, are enough to satisfy our thirst. There is not much need to play with the designs.

Spider web on My Little Pony Tattoo: This one is really cute: the blushing cheek of the pony and the detailed spider web, plus the idea that the pony itself has tattoos of its own on the legs adds to the overall charm. Maybe the pony is blushing because it backed up into the spider web. 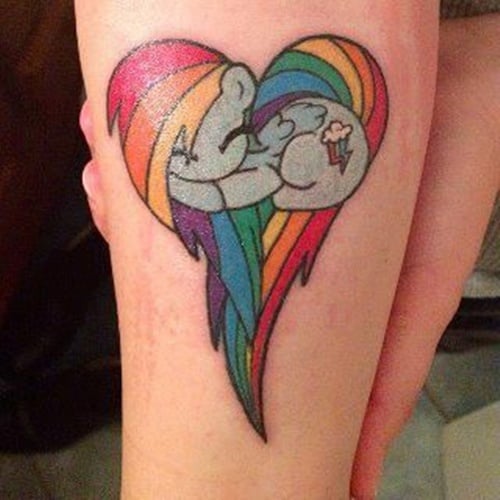 My Little Pony Tattoo in pink color with Wings: If you are not aware of this, we would like to tell you that in the world of My Little Ponies there was the introduction of several new ones which possessed the ability to fly. Though the color is on sober side, the flowing mane and tail along with prancing hooves make up for it. 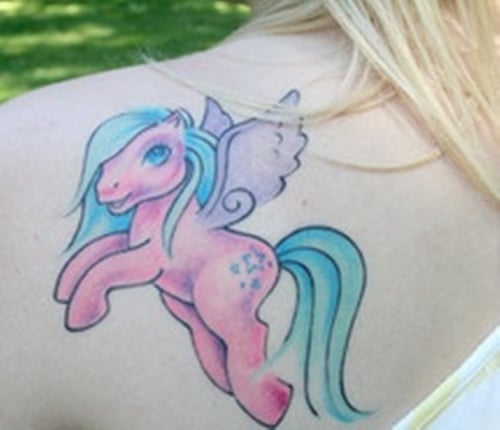 My Little Pony Tattoo in unicorn form with wings in purple color: A very feminine unicorn with details like lovely eyelashes to enhance the look this unicorn looks like the stuff of childhood dreams. 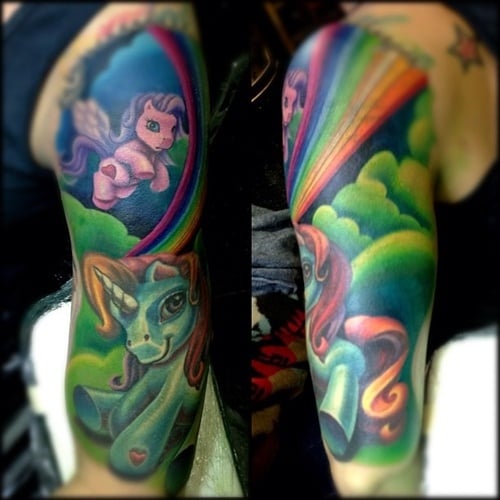 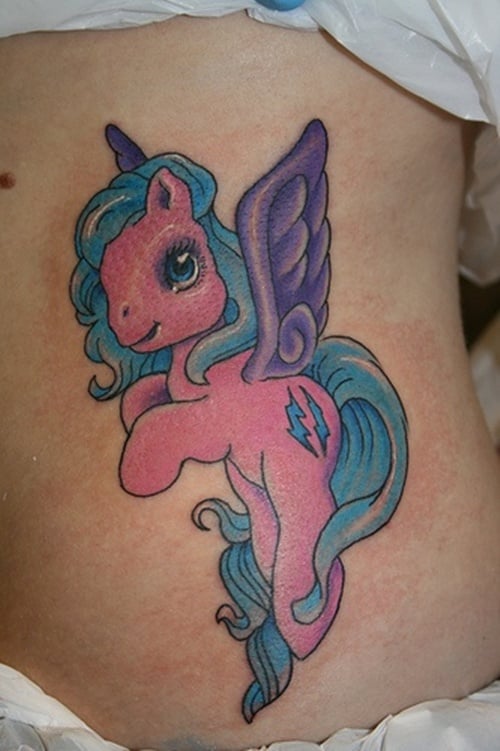 Gothic version of My Little Pony Tattoo: You could call it anything like the punk or heavy metal version, but we prefer to call it the Gothic version due to the spider web that has been added to the flank of the Pony. With the colorful elements added in this one is really an awesome little pony tattoo motif.

My Little Pony Tattoo with Rainbow:  This one has the charming picture of  two cute ponies playing along side of a gorgeous rainbow. It is the perfect representation of the childish fun and mix of fantasies that we used to have as children. 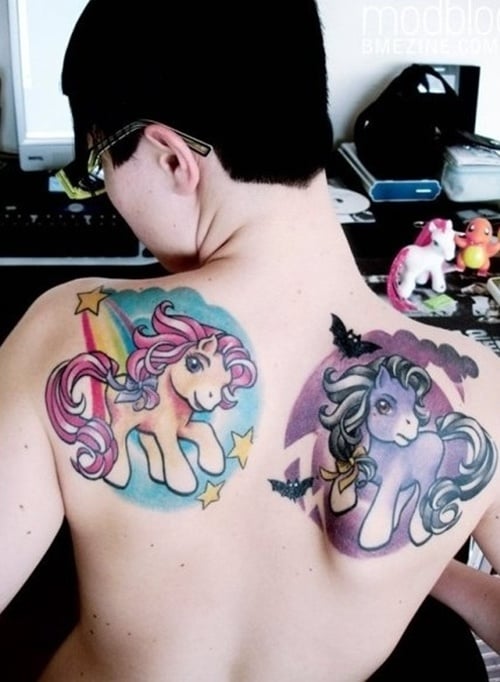 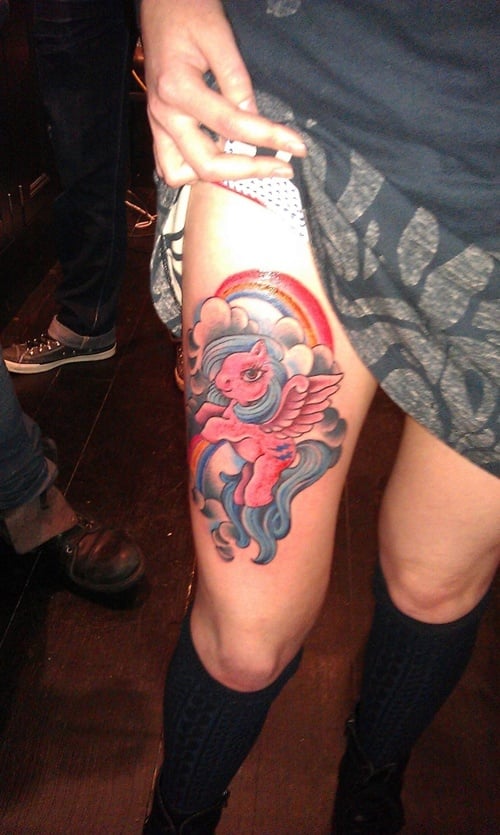 In essence,  we can conclude that the My Little Pony tattoo represents something cute and childlike that most of us believe as a part of us. It is true that most grownups do have a child living in them, and then why not use this slice of our childhood to show it to the world in the form of a tattoo? It will keep us smiling no matter what troubles we face as we grow up.  Here are more beautiful examples of Little Pony Tattoo : 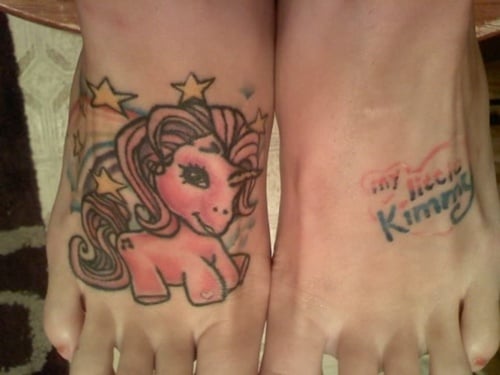 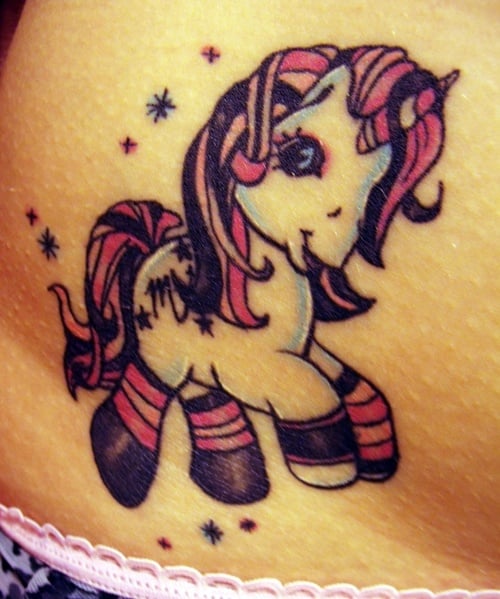 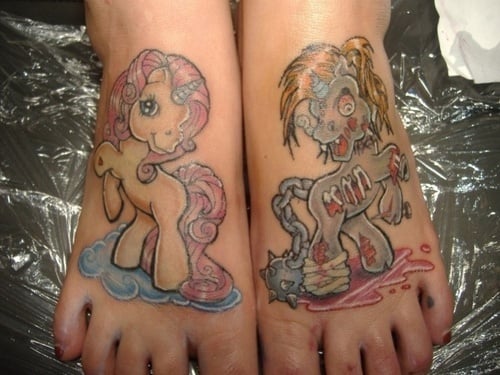 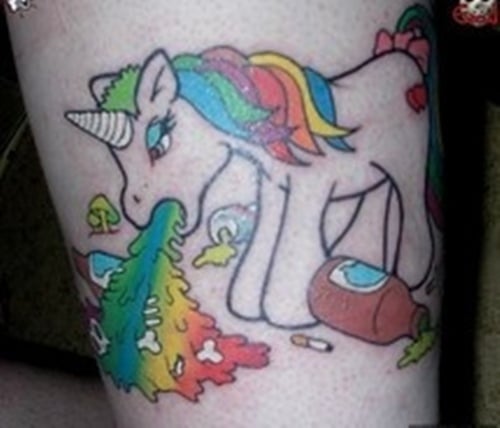 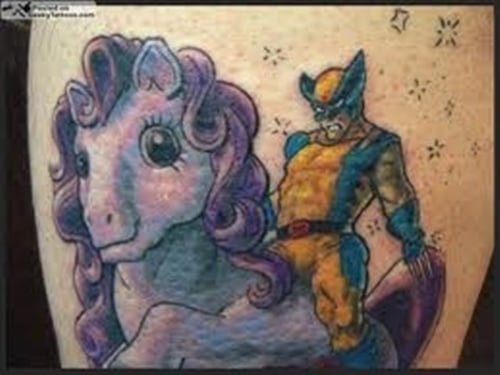 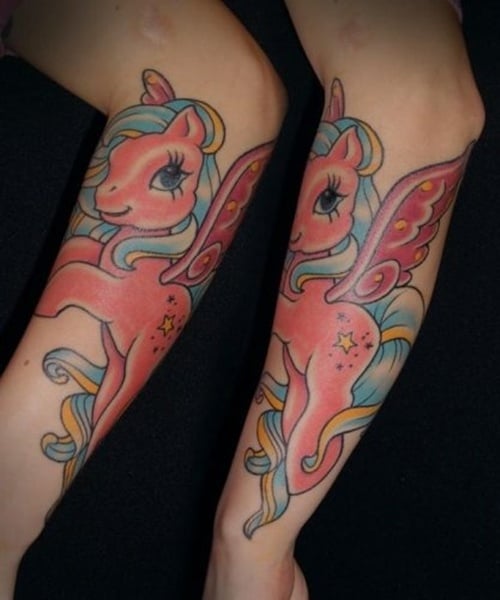 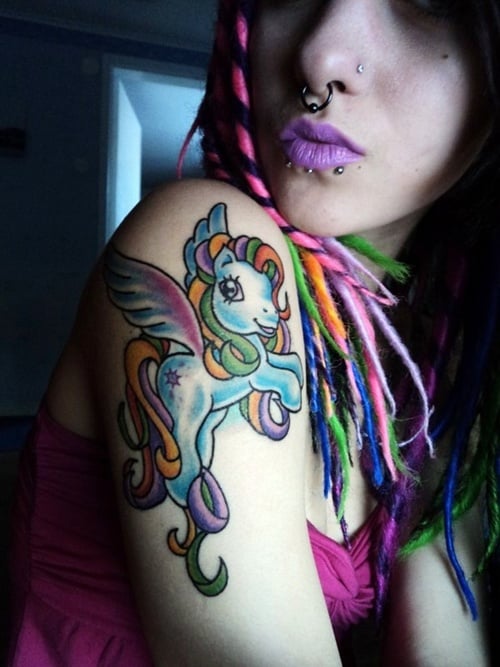 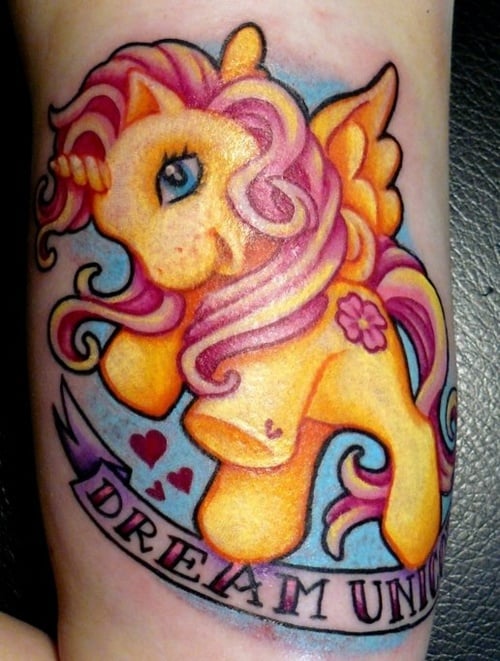 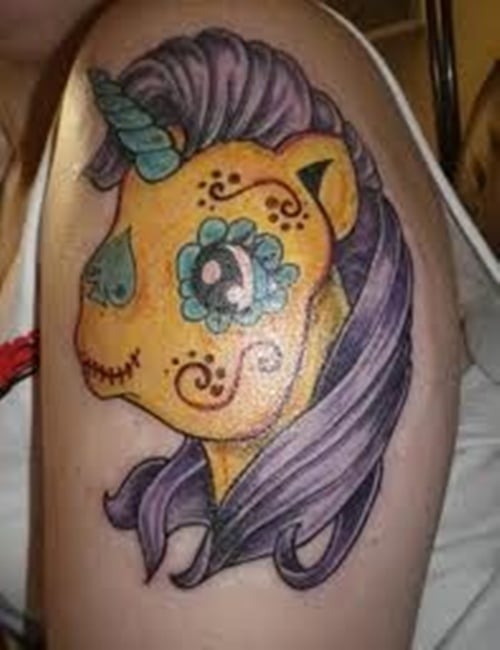 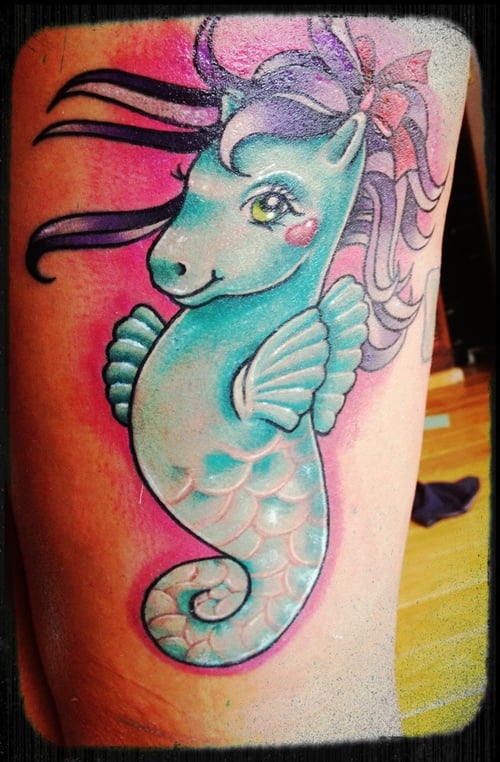 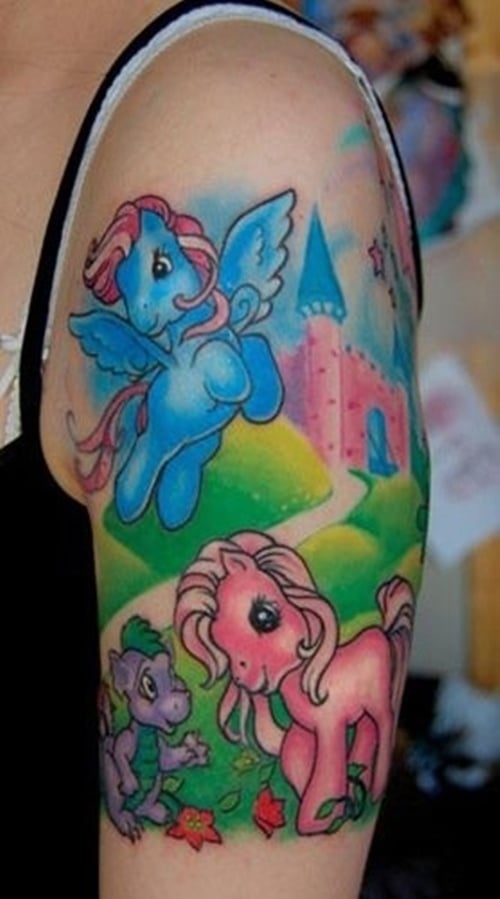 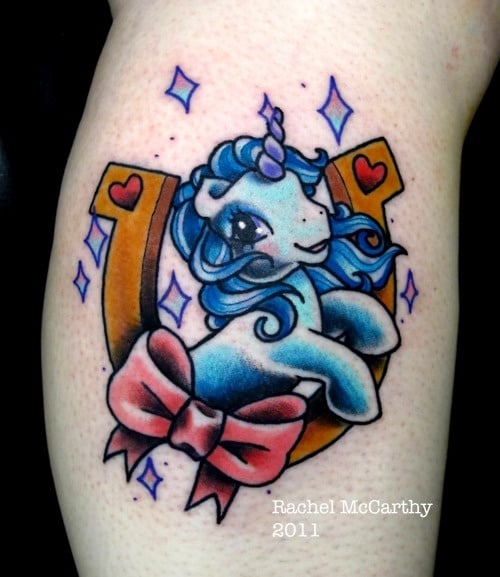 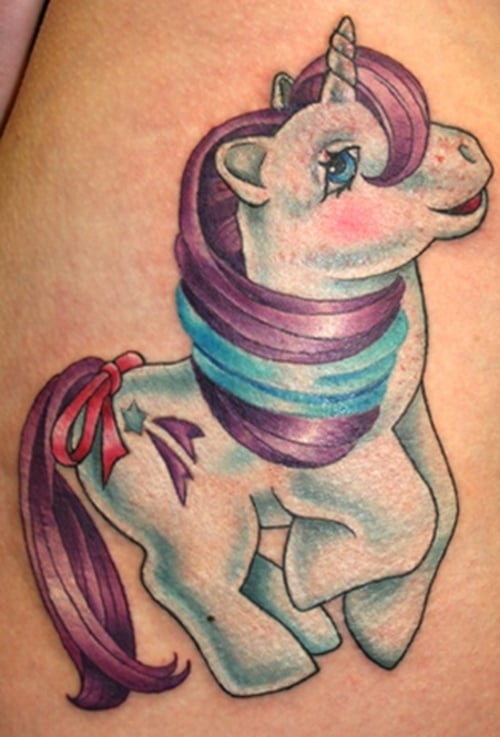 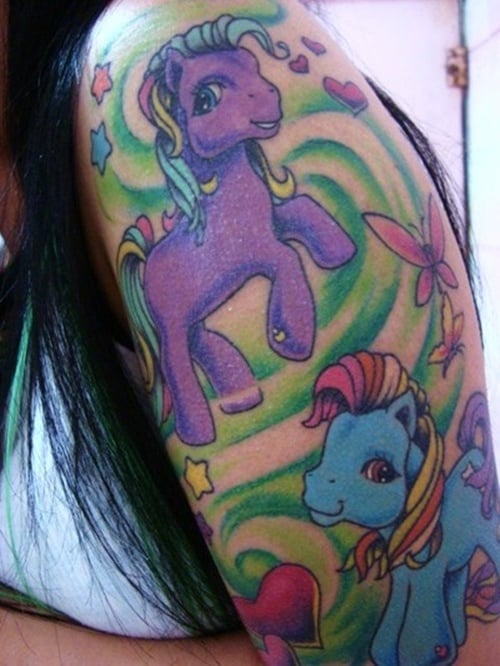 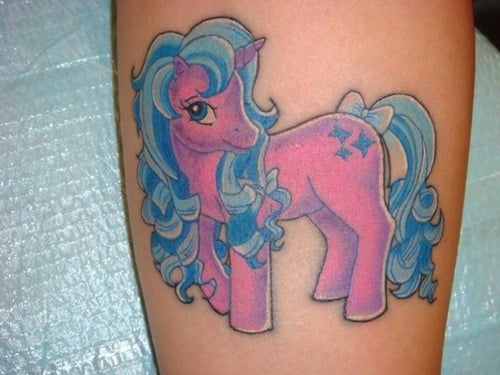 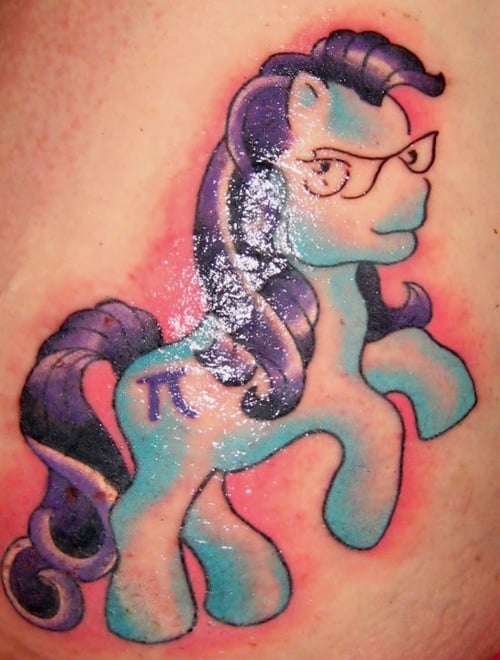 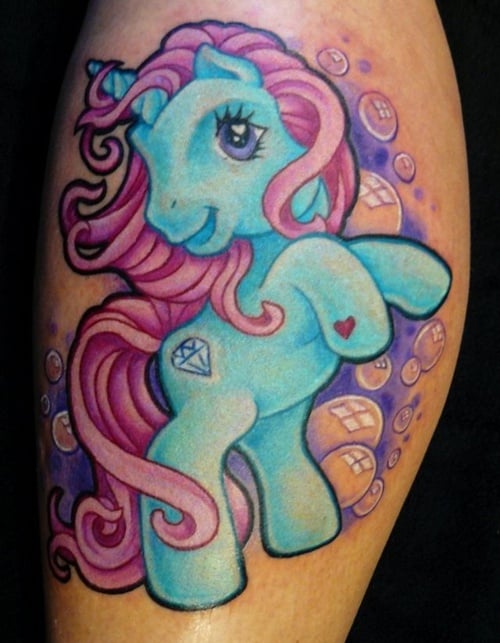 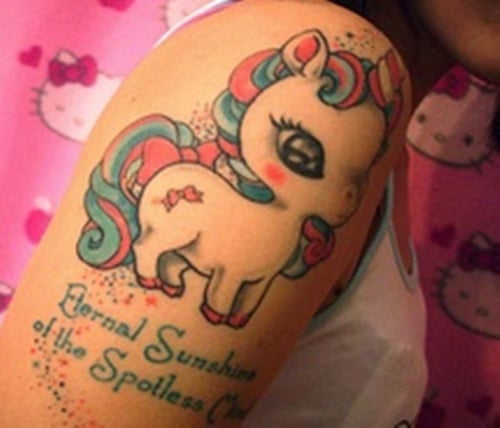 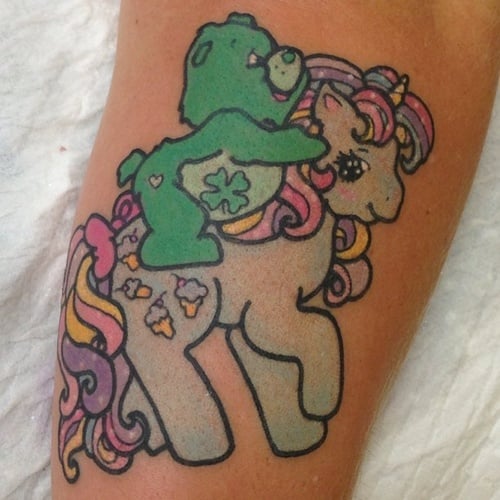 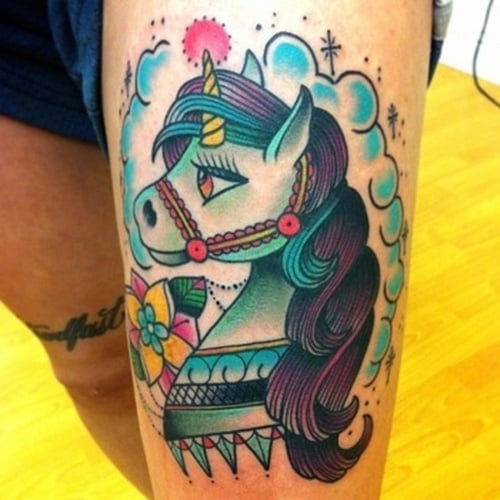