We all know that the Irish believe in things such as Shamrocks, Clovers and Leprechauns and this is deeply rooted in the Celtic beliefs. The usual color theme picked out for the Clover and the Shamrock is various shades of green and brown. Green is a color that is pretty important to people of Celtic and Irish origin. Both these tattoo designs can easily be adapted to many sizes  making it easy to get them tattooed on any part of the body as per your desire or preference. Though not many people get a Leprechaun tattoo, it is still something that some people seek in their tattoo design. 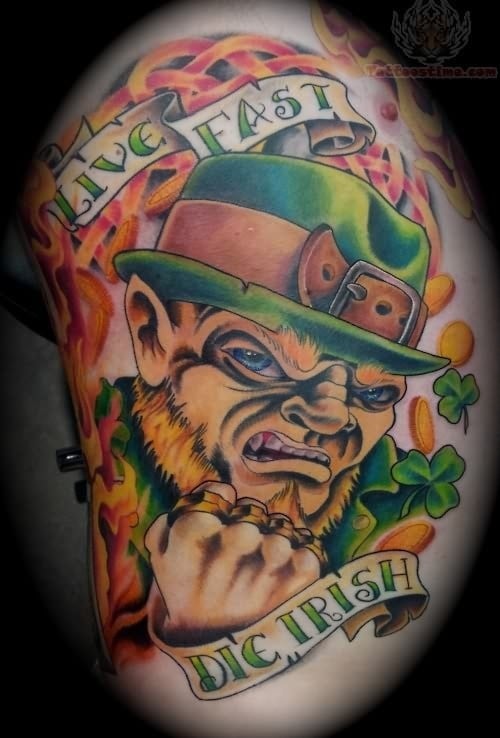 Shamrocks and Clovers: There is nothing that shrieks Celtic more than the Shamrock and clover. These have been a part of day to day life for the people of Ireland for many years. The Irish heritage comes through when you get a Clover or a Shamrock tattoo, The Clover with the four leaves is something that is known across the world and is really rare to come across one with four leaves making it a rarity. The difference between the shamrock and clover is that the shamrock has only three leaves while the clover has four. Plus both of them signify different things. Since these are known symbols especially in the circle of people who know about Celtic art, many of the tattoos having these elements are done in Celtic style.

The clover, apart from being popular with the Irish, is considered a sign of good luck. You will have to look at about a 10000 shamrocks before you can locate a clover. Hence this makes a popular tattoo done for good fortune. With the four leaves on the clover, each one is supposed to have deeper meanings. The first one signifies hope, the second one denotes faith, the third one love and the fourth one is for luck. Some people get the clover tattoo along with each word tattooed on each of the leaves. 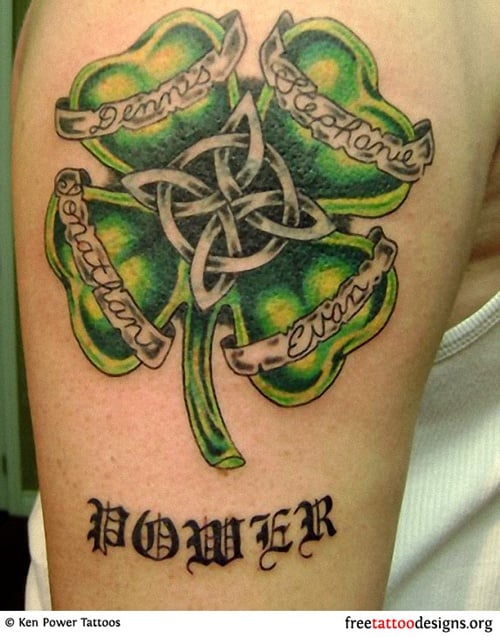 A shamrock tattoo looks really striking when done in Celtic style. You can add other Celtic elements to make this tattoo come together to suit the choices of people. Many people of Irish origin lean towards Clover and Shamrock tattoos. 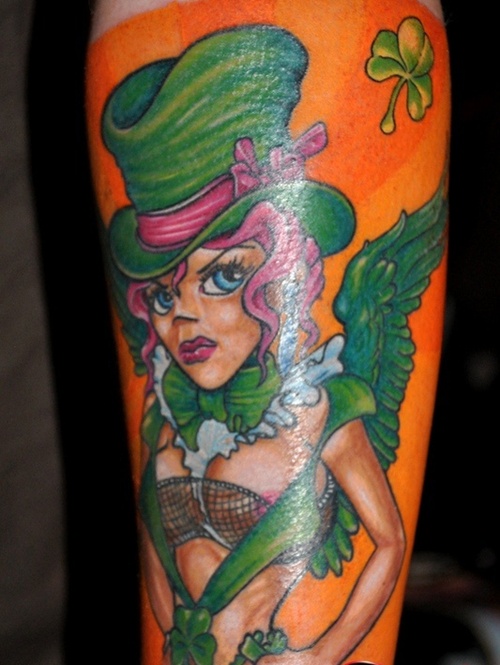 The meanings and symbolism of Shamrock tattoo: It could mean life and the hope that the new life brings. Strictly speaking, it is not  a religious tattoo but it does have a spiritual undertone. People may get a shamrock tattoo for this reason or to show off their roots. People also wear clover tattoos for luck and as a means of touching base with their heritage. You could combine these with Celtic style crosses and other art. The options in this regard are endless plus you have many styles to choose from like simple, funny, Celtic or tribal. 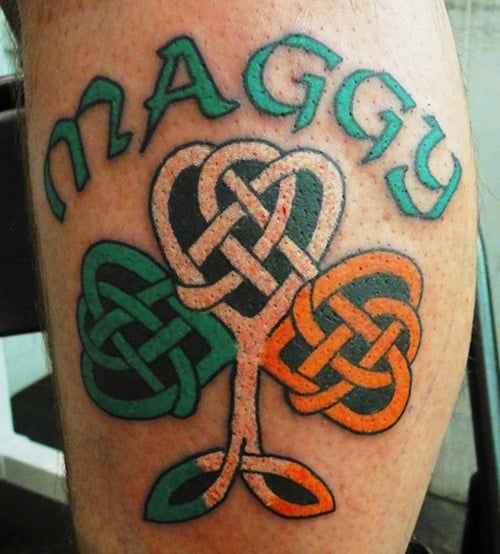 Tattoos with the leprechaun in them: Leprechauns are the stuff of legends in Ireland. They are credited with good luck and often you will see the leprechaun tattoo along with clover. As per the legend, getting hold of a leprechaun will lead you to the pot of gold that he has hidden away where the rainbow ends. But since they are clever and quick, it is difficult to capture a Leprechaun. They are also known for being tricky and creating mischief for people. They are known to love drinking and picking up squabbles. They can make an amusing and cute addition to your tattoo. Mostly leprechauns have a lot of green in their attire. 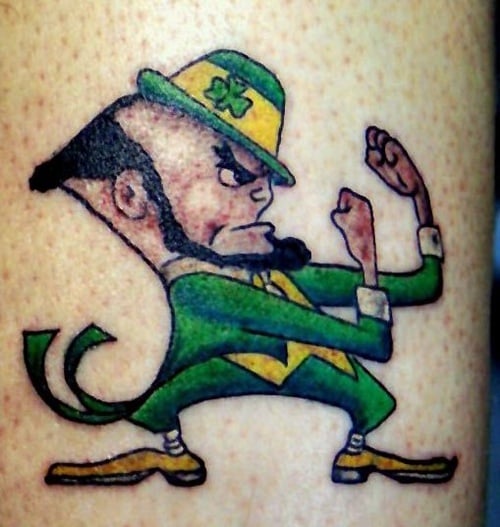 You can get a tattoo by combining all the elements – the clover, the shamrock, the rainbow, the pot of gold and the leprechaun or work with a combination of any of these elements to come up with a lovely tattoo design. Some more examples for Clover, Shamrock and Leprechaun Tattoo are shown below: 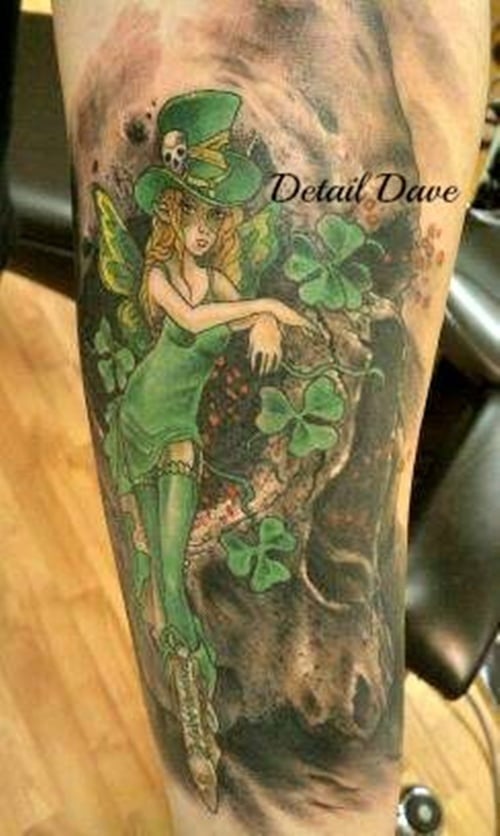 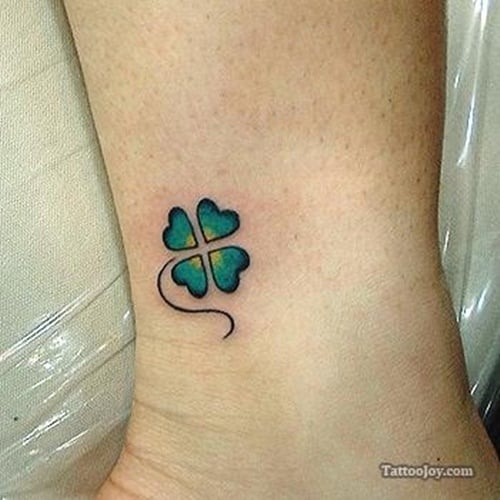 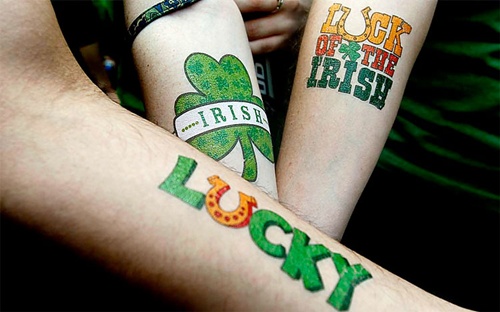 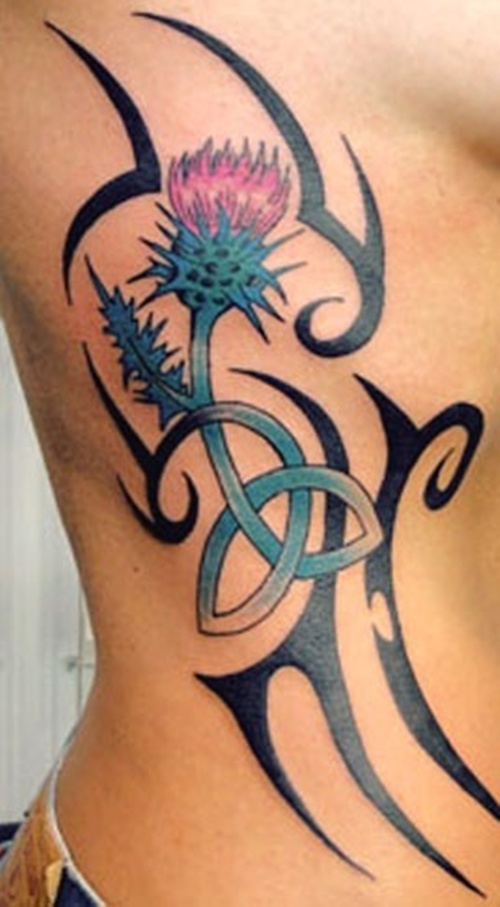 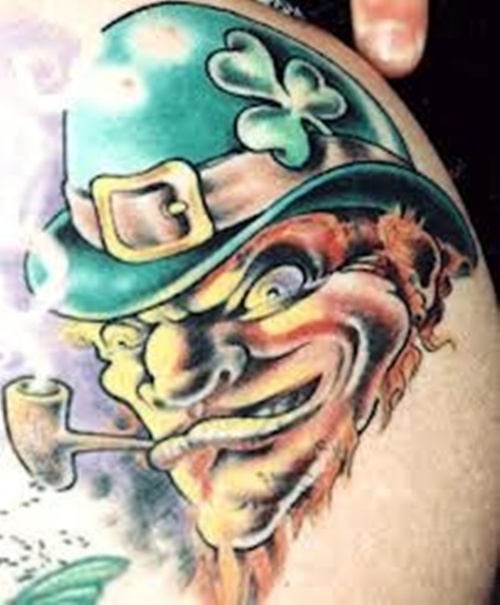 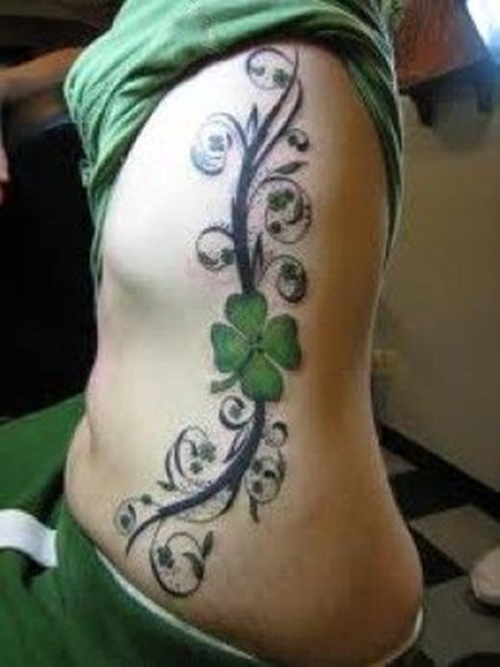 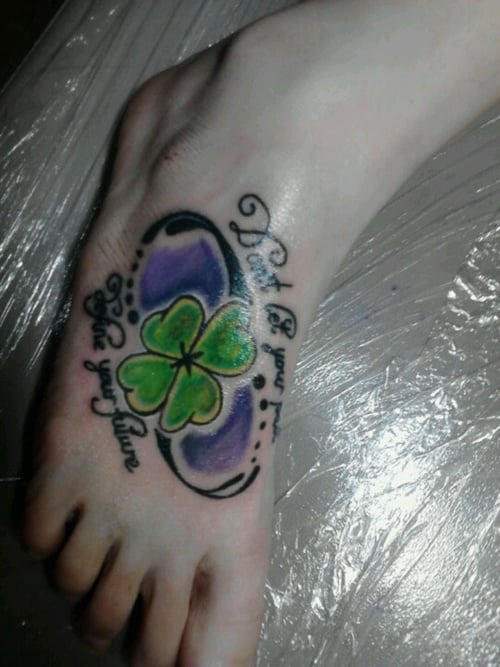 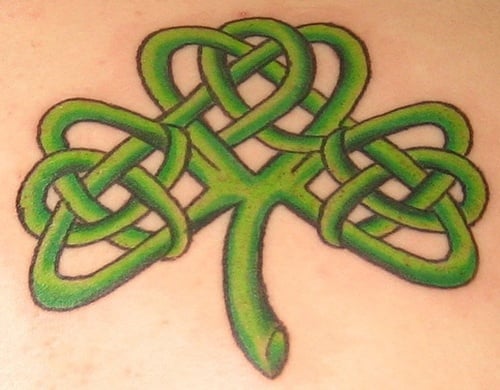 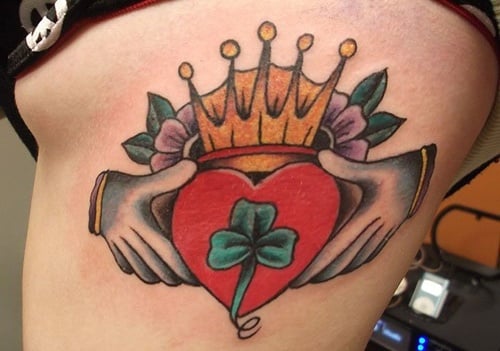 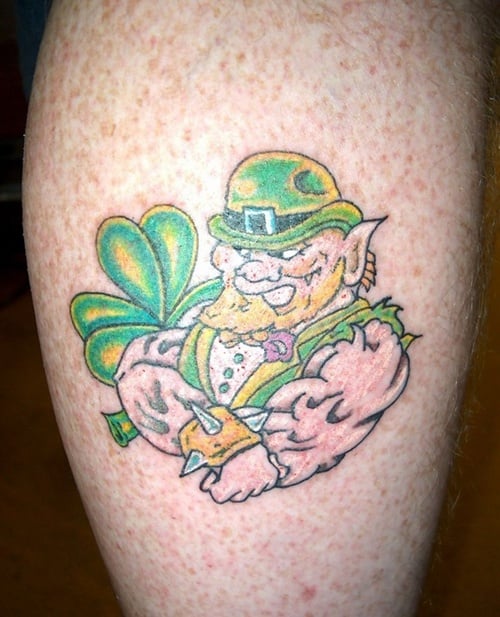 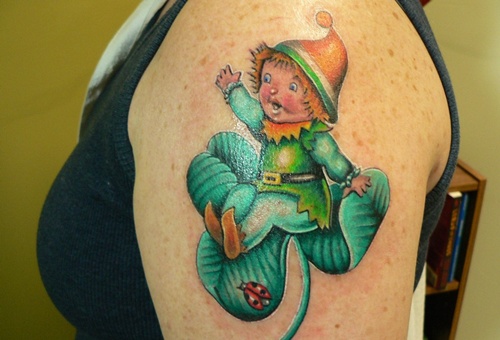 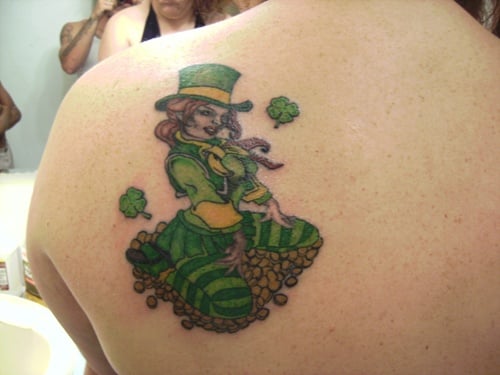 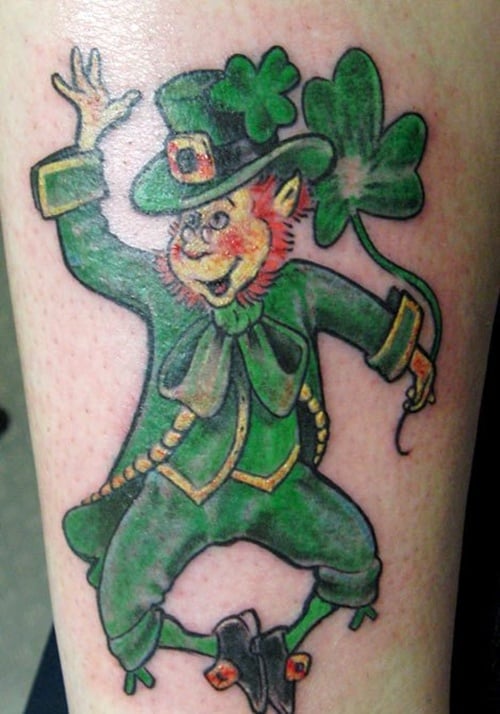 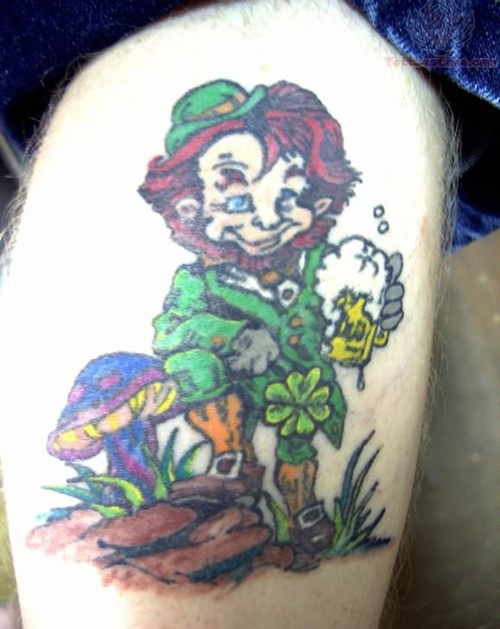 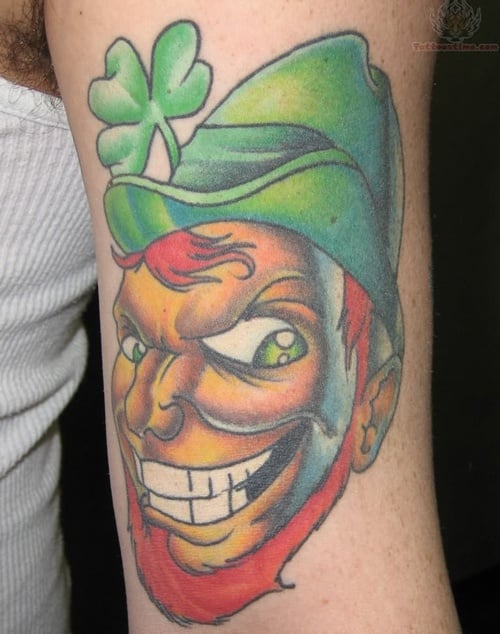 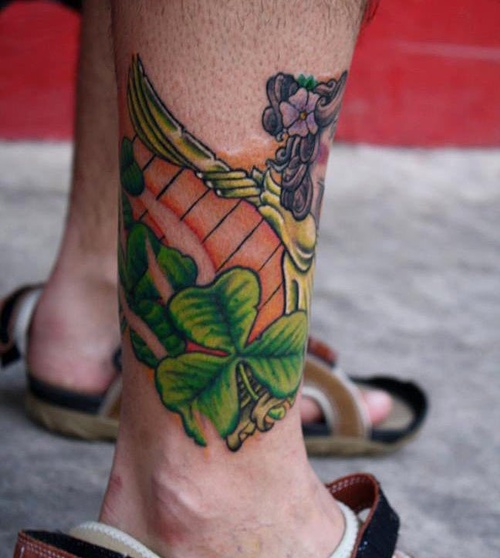 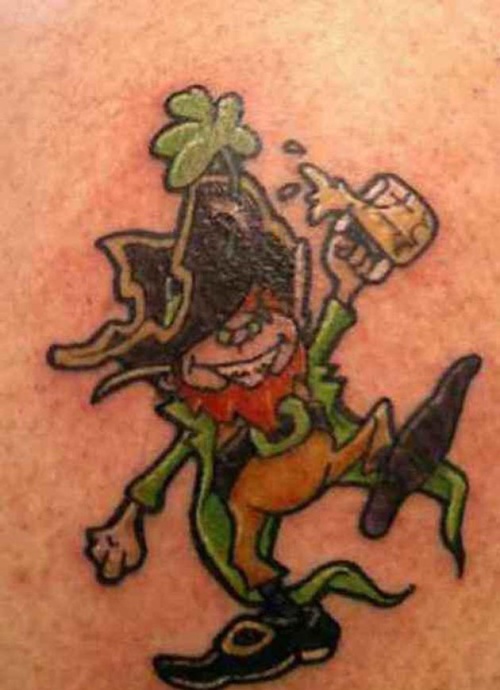 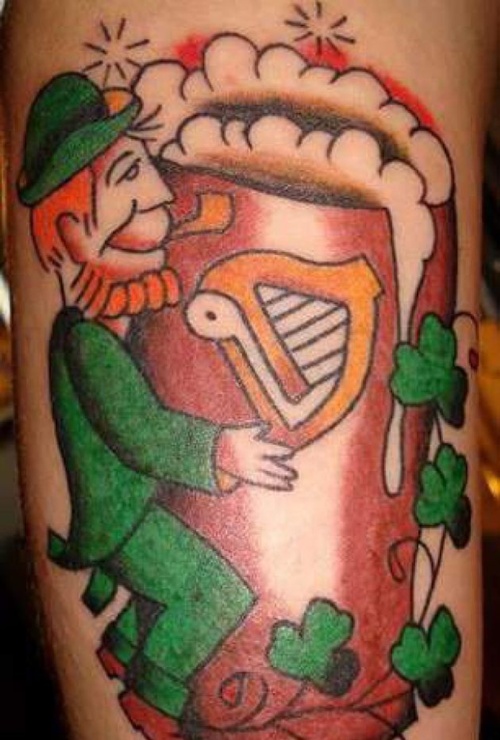 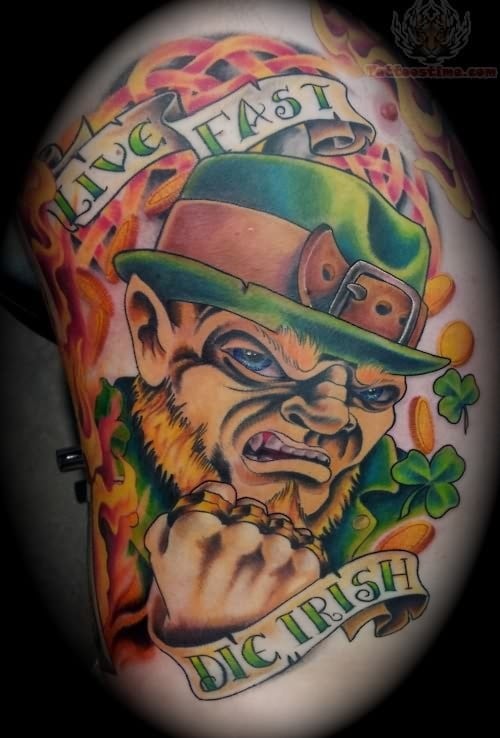