Cows have always been considered as one of the favorite animals known for its gentleness. Many people see the cow as a pet that can raise them with food and some people like this animal as it acts as a food source for them. This interesting animal has joined the trend and has become a popular choice for tattoo lovers.

Most of the designs portray a female cow that looks very beautiful, cute and calm. Not being a mainstream tattoo, but this tattoo is a very funny and fascinating choice. Most people who get this tattoo done, are those who either love this animal very much or want to give a hilarious theme to their tattoo. In most of the cases, this tattoo is not worn by those who consider cow just for eating purposes. After all, their long lashed eyes can surely make you feel guilty for having a thought in your mind to kill them. 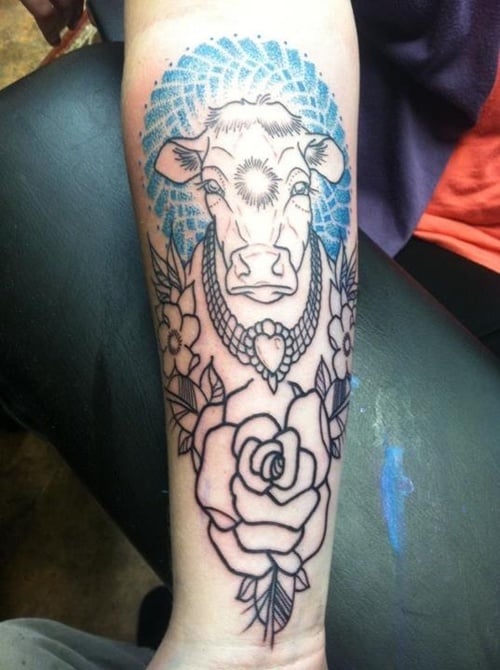 Today, we have come up with an interesting collection of various designs of cow tattoos that can surely fascinate you. You can also take some ideas for your next tattoo by having a glance on all the designs available in this post.

One interesting point to note is that although bulls can also be designed under this tattoo theme, but, as there is difference between the natures of these two animals, there is a difference between the expressions of the two different tattoos as well. While cow tattoos are always designed in a humorous manner, whereas bulls are depicted in some fierce manner, usually on the wild side. 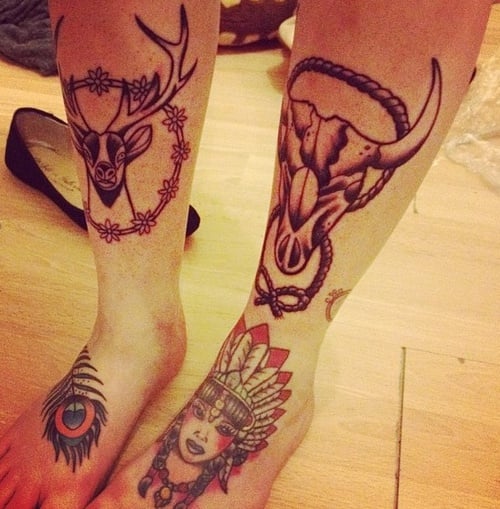 Most of the cow tattoos portray long lashed, trusting eyes of the cow that show their gentleness. This gentleness only is the epitome of what a cow is considered in the mind of someone acquiring one for meat. A trust factor is also shown by the funny way of standing out the ears at one side.

Then comes the choice of colour of the cow. You can choose any colour, depending upon your imagination what you think of a traditional cow in your mind. Also, the way of drawing the cow is such that the cow is facing out directly, making it appear as if you are standing right in front of it and looking into its eyes.

Most people who love cow as a pet or have very loving memories with it, choose this tattoo design to show their love for it. This unique tattoo design has vibrant colours and very lively look. The head of the cow is the centre of the tattoo and acts as the main focus of the tattoo. The quality depiction of the head with bright colours, gives a very interesting appearance to the tattoo.

The cow head is showcased very well by the scrolling moving up the horns and behind the lotus. This tattoo design can be well depicted in one word, which is ‘cute’. 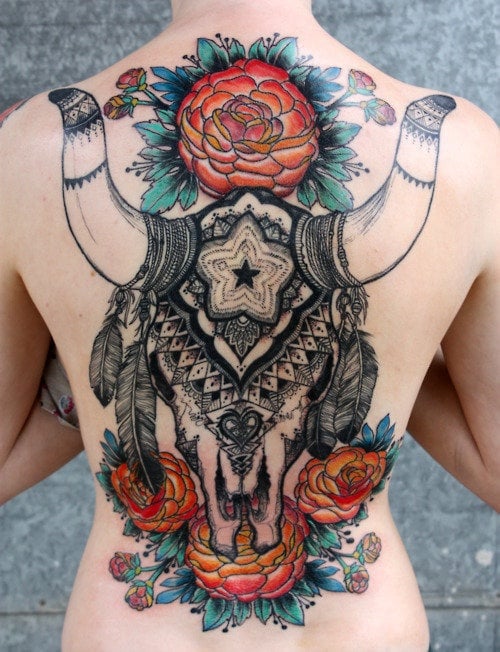 The most interesting factor about this tattoo design which attracts everybody, is that one can get confused in judging whether it is a cow tattoo or a bull tattoo. This is because the artist- either by mistake or voluntarily- designed this tattoo with a bull’s head on a female cow’s head. Also, the snorting bull’s head is depicted really very well.

One can find an out of the box perspective to look at the tattoo with such a high quality which doesn’t allow you to overlook this tattoo design. The most fabulous part is the detailed work of the tattoo that includes the magnificently done musculature of the beast. The sinewy muscle of the powerful animal is also revealed very well. 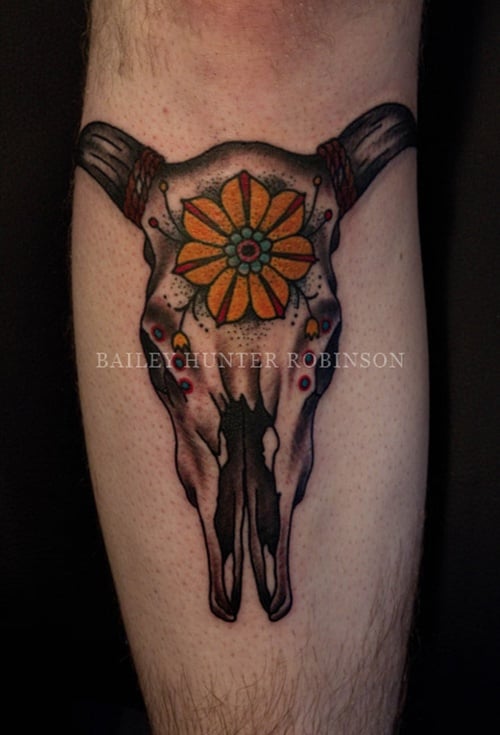 So, this tattoo design may surely cause you to be left with scratching your head so as to decide whether this was done purposely by the artist or it was a mistake by the artist. You may better decide it by mulling over the image first.

This is also an interesting design describing cow as an angel floating on the cloud. The eye catching part is the smiling face, big eyes and ears pointing out which give a funny essence to the tattoo.

With a hope that you would enjoy visiting this page, we brought a number of designs that showcased a number of human reactions and observations of cows. Thanks for visiting our website. 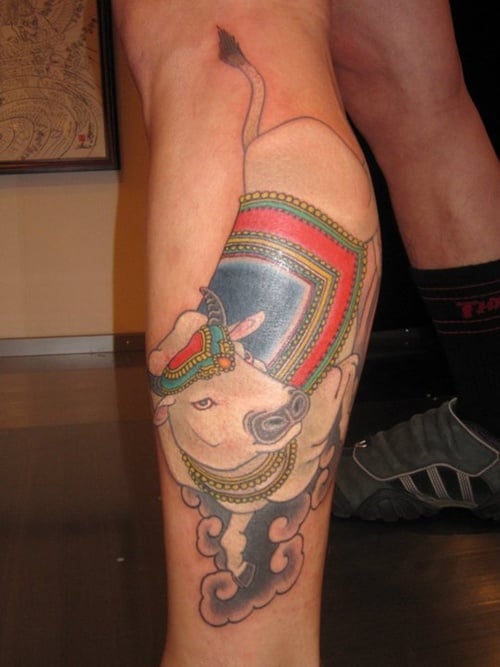 Some of the other examples of cow tattoo designs are shown below: